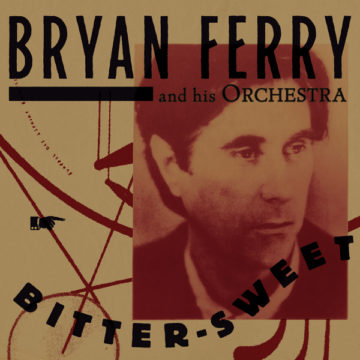 Bryan Ferry has been down this road before, and it is always welcomed. Ferry is joined by his Orchestra for Bitter-Sweet, a  very original and creative reinterpretation of classic Bryan Ferry and Roxy Music songs. In 2012, Bryan Ferry and His Orchestra released the album The Jazz Age and was heavily featured on the soundtrack of The Great Gatsby performing Roxy Music songs in a 1920s or 1930s style. Ferry has always had a love for the music of the 1930s and 1940s as demonstrated with his covers (“These Foolish Things”. “Smoke Gets In Your Eyes”, “You Are My Sunshine”) on previous albums as well his album As Time Goes By, an entire album of covers from that era.

Whereas The Jazz Age was an instrumental album, Bitter-Sweet features vocals on the majority of the songs. There are instrumentals (“Limbo” is one of the best) but here Ferry uses his voice to not only invoke an emotion but an entire era. And he succeeds. Listen to “While My Heart Is Still Beating”. It is a work of art and Ferry sounds fantastic. Like Sinatra in his later years, Ferry’s voice has aged and changed but it suits what he wants to achieve with this album.

As with The Jazz Age, the music has its origins as part of a soundtrack. In the case of Bitter-Sweet, it started with Ferry providing music for the Netflix series, Babylon Berlin, a period piece for which this style of music fit perfectly. The album sleeve is brilliantly designed to fit the time period as well.

One of the many aspects that makes Ferry a truly original artist is that he has always had one foot firmly planted in the past and one foot in the future. Here he is leaning on his foot in the past, but the arrangements, while authentic for the period, are truly ahead of our time. Jazz, ragtime, ballads, they are all here. It is a brilliant album and allows him to reinvent some classic songs. The songs lend themselves to this treatment and he has created a whole new album. Brilliant!

Born and raised in Whitby, Aaron discovered music through his love of The Beatles. This led to a career in radio, writing for various publications, and ultimately a radio show about The Beatles (Beatles Universe), which ran for over four years. When not immersed in music, Aaron enjoys spending time with the loves of his life -- his wife Andrea, and daughters Emily and Linda (all of whom have an intense love of music too).
RELATED ARTICLES
album reviewalbum reviewsbmg
7.0