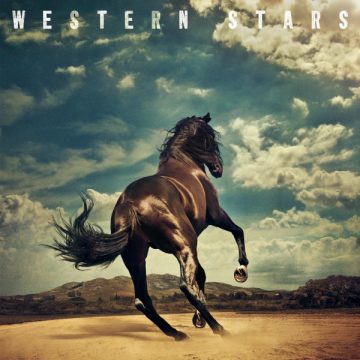 Following an unprecedentedly successful residency on Broadway – culminating with Springsteen On Broadway, a live album and Netflix concert film, released last December – Bruce Springsteen is back. Western Stars sees The Boss returns without The E Street Band for his first collection of all original material since 2012’s Wrecking Ball and his first solo record since 2005’s Devils & Dust. Inspired very much by the pop music from Southern California in the ‘70s, Western Stars is a vintage throwback that sounds like it was pulled straight from an unopened time capsule, while retaining Springsteen’s distinct sound.

Opening with his gravelly yet smooth voice on “Hitch Hikin’”, Springsteen delivers on his promise of creating a soundscape clearly inspired by the likes of Glen Campbell and Burt Bacharach. As the album continues to roll forward with tracks like “The Wayfarer” and “Tucson Train”, there is almost a sense of magic in the simplicity of the music, yet the sophistication of Springsteen’s songwriting is truly astounding. The title track almost immediately demonstrates this while at the same time delivering one of the most emotional performances on the record in the form of a stirring, dark, and stunning ballad.

While Western Stars is an achievement for Springsteen, it also serves as an exercise in songwriting, one at which he succeeds by seemingly effortlessly transporting the listener to a time long gone. His use of lush strings on tracks like “Drive Fast (The Stuntman)” and “Sundown”, as well as the warm horns on “Sleepy Joe’s Café” give the album a feeling reminiscent of classic soundtracks, while the more stripped down and bare tracks – “Chasin’ Wild Horses”, “Western Stars”, and “Somewhere North Of Nashville” – create a sense of intimacy and vulnerability that liken his work to the acoustic sound of Bob Dylan and Tom Petty. It is also worth noting that Western Stars features some of Springsteen’s strongest vocal performances of the last decade or so with tracks like “Sundown” and the incredible “There Goes My Miracle”, ultimately capturing a raw and raspy, yet equally warm and smooth, vocal sound that is sure to leave the listener captivated.

When considering the massive success of Wrecking Ball and its extensive incredible tour, Born To Run, Springsteen’s hit 2016 memoir, and Springsteen On Broadway, it truly seems that Springsteen has reached a latter renaissance within his already remarkable career. In that sense, Western Stars furthers this with a record that seems to surpass all expectations with a thirteen-track cinematic masterpiece. While I am excited to hear Springsteen and The E Street Band reunite for their planned 2020 release, Western Stars embraces a new element of Springsteen’s artistry while still remaining reminiscent of past albums such as Nebraska, The River, and Darkness On The Edge Of Town. What Springsteen most impressively accomplishes with Western Stars, however, is furthering his legacy among the greatest American songwriters of the modern era. Much like Guthrie, Dylan, Nelson, and Petty – all of whom are clear sources of inspiration – the great American songbook would be incomplete without Springsteen.

A passion for music has always been a part of Gerrod’s life. As a young boy, he was raised on a steady diet of the music from The Chili Peppers, Aerosmith, The Stones, Prince, and others from his mum. Raised in the GTA, Gerrod continued to foster his love for music by attending a wide range of concerts and learning the drums. His unapologetic passion for music has no bounds and has spread to a wide variety of styles, whether it be the 90’s rock that sound tracked his teenage years, the jazz he studied in university, or his newfound love for hip-hop. He recently received his bachelors in music and education from York University and is passionate about writing and reviewing good (and less than good) music. Gerrod is also the drummer and songwriter for a Toronto based rock & roll band, One In The Chamber.
RELATED ARTICLES
album reviewalbum reviewsbruce springsteen
8.0