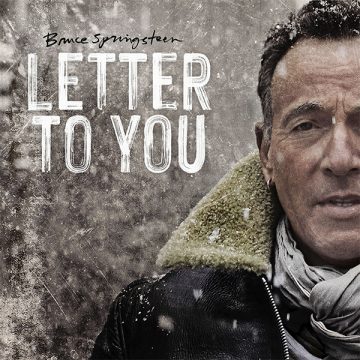 Bruce Springsteen has returned with Letter To You, his 20th studio album, and follow-up to his 2019 dive into the Americana music of the 1970s on Western Stars. The album also marks Springsteen’s first performance with the E Street Band since The River 2016 tour. Recorded over the span of five days, and entirely live, off the floor, without any overdubs, Letter To You delivers nine brand new songs, alongside new recordings of three never released, but highly-anticipated songs from the ‘70s.

Opening with the crisp fingerpicking of a steel-stringed acoustic guitar, Springsteen’s gruff rasp brings a sense of warmth and melody to “One Minute You’re Here”. The emotive ballad is stirring and, with its musical simplicity and Springsteen’s charisma, will pull you in before they break into “Letter To You”. A triumphant return to form and a mid-tempo contemporary rocker, the album’s title track sets the tone for the album and fits very much in line with the style and sound of Wrecking Ball, Springsteen’s last true studio record with The E Street Band. “Letter To You”, much like the following track “Burnin’ Train”, offer a modern revival to the traditional Springsteen sound which continues to be timeless.

Letter To You captures Springsteen sounding revitalized and with The E Street Band behind him, he’s able to properly breathe new life into the fabled “Janey Needs A Shooter Now”, “If I Was A Priest”, and “Song For Orphans”. The three tracks, written in the ‘70s, have been coveted by lifelong fans and have appeared in Springsteen’s live sets and unofficial bootlegs. Rerecorded during the sessions for Letter To You, Springsteen and company bring a deeper level of maturity and sophistication to the trio of songs that sound reminiscent of Springsteen’s early catalogue and yet, feel seamless within the album. “Janey Needs A Shooter”, a lengthy mid-tempo folk rock jam, “If I Was A Priest”, a classic Springsteen rocker, and “Song For Orphans”, a soulful and bluesy ballad, all clock in over six minutes and are definite highlights on a great record. Furthermore, the reflective “Last Man Standing”, the massive “Rainmaker”, and the stomping rock of “Ghosts” prove the new material can be equally as strong as the reworked classic songs.

Despite remaining stuck in the mid-tempo gear, Letter To You stands as a latter career highpoint for The Boss and demonstrates the value of his collaboration with The E Street Band. Proving to never stop pushing himself forward, Letter To You is a successful experiment in recording for the band and the live off the floor process makes for an organic album that plays as if the sessions are unfolding right in front of you. While not their most dynamic album, the music of Letter To You is bound to be strong addition to Springsteen’s iconic live performances.

A passion for music has always been a part of Gerrod’s life. As a young boy, he was raised on a steady diet of the music from The Chili Peppers, Aerosmith, The Stones, Prince, and others from his mum. Raised in the GTA, Gerrod continued to foster his love for music by attending a wide range of concerts and learning the drums. His unapologetic passion for music has no bounds and has spread to a wide variety of styles, whether it be the 90’s rock that sound tracked his teenage years, the jazz he studied in university, or his newfound love for hip-hop. He recently received his bachelors in music and education from York University and is passionate about writing and reviewing good (and less than good) music. Gerrod is also the drummer and songwriter for a Toronto based rock & roll band, One In The Chamber.
RELATED ARTICLES
album reviewalbum reviewsbruce springsteen
7.0