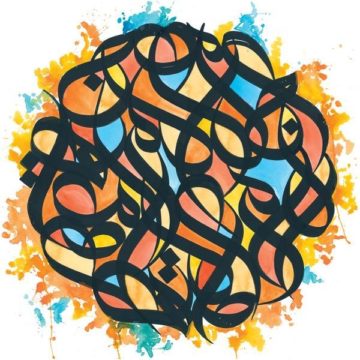 Brother Ali
All The Beauty In This Whole Life
Rhymesayers Entertainment

Articulating his journey of pain and healing, Minneapolis MC Brother Ali, conquers his demons with his first official release in five years, All The Beauty In This Whole Life. Produced entirely by Anthony “Ant” Davis, the album is a soulful collection of personal stories detailed with trial and triumph, ultimately finding Ali salvation from a dark past.

With a hard-hitting delivery and words that pack an even greater punch, All The Beauty In This Whole Life tackles real issues affecting real people. The first track, “Pen to Paper,” sees Ali looking inward as he shares the criticisms he’s faced for expelling the truth in his art as a form of activism against prejudice and discrimination in the U.S., notably surrounding issues of police brutality and racial identity, which he discusses in detail on “Dear Black Son” and “Before They Called You White.” He addresses the problem with technology and social media on “Special Effects” featuring deM alaS, fearing the loss of human connection. “Out of Here,” one of the final and heaviest of tracks, finds Ali opening up about the suicides of both his father and grandfather, singing “Every man before me in my fam died by his own hands/how am I supposed to understand my own role in the plan/when nobody who grows old stands a chance?”, only to conclude with the title track, in which redemption is sought by remaining true and living a life of purpose, guided by love and virtue. Through highs and lows, contrasting moments of grief with gratitude, All The Beauty In This Whole Life depicts life’s winding road, with eloquence and grace.

A successful rapper is one who has something meaningful to say, penning words that will resonate with a broad audience. Ali has achieved just that; in an increasingly polarized world at the hands of inequality, he remains cemented as a critical commentator of Western culture through his experiences as a Muslim, Albino, American, with no choice but to be socially conscious of the everyday struggles that plague the masses. In a quest for the truth, he exposes the world’s ugliness, and in turn seeks beauty by envisioning ways to reach peace in our everyday lives despite the hardships we face. In a period of great political divide, Ali couldn’t have chosen a better time to come out of the shadows.

Here's what we think...
Spill Rating
Fan Rating
Rate Here
New Criteria
10
10
8.0
Total Spill Rating
10
Total Fan Rating
1 rating
You have rated this
Album Reviews
album reviewsall the beauty in this whole lifebrother aliown light (what hearts are for)rhymesayers entertainment
album reviews, all the beauty in this whole life, brother ali, own light (what hearts are for), rhymesayers entertainment
About the Author
Emily Nichol

Emily is a sociology student at McMaster University with a passion for social change, focused on issues surrounding gender equality and societal mental health. She believes that music, whether going to concerts or listening alone, is the best way for people to feel connected. After abandoning her small-town roots for opportunities in Toronto, she intends to merge her two loves of writing and music in the hopes of satiating her wayward soul. Follow her on Twitter at @emmniic18.
RELATED ARTICLES
album reviewsrhymesayers entertainment
7.0