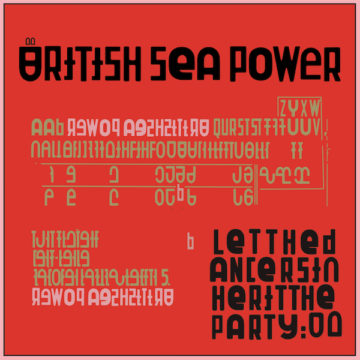 Since the release of their 2003 debut The Decline of British Sea Power, the band has been one hit single away from “the bigtime.” What “the bigtime” means for an English art rock sextet with an eye towards artsy post punk is up for interpretation. They’re one of those acts that you’ve always thought should have been a bigger deal. While their first three records went silver in the UK, North America has always remained aloof to their retro-leaning charms.

Critics have lumped the band in with early post-punkers Joy Division and The Cure, but this feels like a lazy point of reference. Some of the prominent bass lines and synth-fills recall the dawn of post-punk, but the layers of pop sensible vocals and rhythm guitar suggest something more accessible. Think Echo and the Bunnymen, Psychedelic Furs deep cuts or the unfortunately forgotten Wild Swans.

And while we’re still waiting for that breakout track to catapult the band into broader popular culture, British Sea Power’s latest release, the partially crowdfunded Let the Dancers Inherit the Party feels like the triumphant return of a former sonic superpower. Quite the paradox for a band that last released a record two years ago, don’t you think? This collection of tracks offers an auspicious point of view on contemporary paranoia and post-political depression – the perfect platform for a band seeking to re-establish itself as a band sniffing the establishment.

After a short instrumental intro track, “Bad Bohemian” shakes off those falsely assigned cobwebs. It’s among the band’s most radio-friendly tracks. A grabber with an accessible hook that stirs the curious, but leaves the discriminating to reminisce over the band’s undervalued craftsmanship on peak British Sea Power records like Open Season or Do You Like Rock Music? “What You’re Doing” answers the call for sweep and scale, driven by a backbeat and the tease of jangle pop riffs that never reach a crescendo.

The album finds its proper mid- to down-tempo wavelength, forever the band’s strength, during this middle third of the record. Guitar outbursts, low-key vocals. And then just when the album seems to stall on the AM radio ditty “Electrical Kittens,” British Sea Power shows us something we might not have seen from these seasoned indie vets. At around the three-minute mark of “Saint Jerome,” lead vocalist Jan Scott Wilkinson lets his voice trail away with the beat, not quite a full breakdown of the orchestration, before concluding the track with a guitar-heavy, tribal resurgence usurped only when the bass drum cacophony commandeers the melody.

Let the Dancers Inherit the Party concludes with a touch of epic poetry. “Don’t Let the Sun Get in the Way” leans heavily on the melodic cinema scoring the band did on Man of Aran or the brass-and-band experiment Sea of Brass before fading out into the five-minute dirge, “Alone Piano.”

When the album recedes into silence, we’re left stirred and intermittently shaken. And while the notion that British Sea Power needed a comeback record feels face value false, this first collection of new material in four years reunites the band with its familiar status of up-and-comers on the verge of stardom. And maybe that’s exactly what success ultimately means for British Sea Power.

James David Patrick has a B.A. in film studies from Emory University, an M.F.A in Creative Writing from the University of Southern Maine, and an honorary Ph.D. in bullshitting about everything else from the College of Two Pints. His fiction and non-fiction has appeared in PANK, Monkeybicycle, Squalorly, Specter Lit, and Bartleby Snopes among other wordy magazines. While he does not like to brag (much), he has interviewed Tom Hanks and is pretty sure you haven't. He bl-gs about music, movies, and nostalgia at thirtyhertzrumble.com and runs the James Bond Social Media Project at thejamesbondsocialmediaproject.com. James lives in Pittsburgh, PA.
RELATED ARTICLES
album reviewscaroline international
7.0