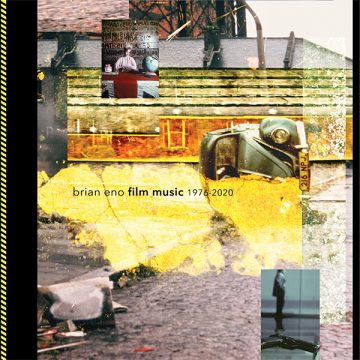 This compilation has been long awaited by Eno fans. Film Music: 1976 – 2020 is a fairly comprehensive package of Brian Eno’s soundtrack work for the past four decades. For fans, such as I, this meant having to buy a lot of different albums to obtain that one Eno track. Now, here they are, all put together in one fantastic collection.

Eno’s music has always lent itself to film and to soundtracks. His moody instrumental work, combined with his ambient material, always seemed custom made for films. He began his soundtrack work in 1976, and released his first Music For Films album in 1978. Two more such albums would follow.

This is not an ambient album. While some of the songs may fall in that category, that is not the intent nor the purpose of the collection. Far from it. Songs like “You Don’t Miss Your Water”, a cover of the William Bell song from Married To The Mob, has Eno singing, which occurs far too seldom. Elsewhere, his vocals are heard on the wonderful “Under” from Cool World. Other songs are just pure instrumentals, such as the oldest track on the album “Final Sunset” from the film Sebastiane, an incredible and moving piece that one finds hard to believe was written and recorded nearly 45 years ago.

What makes this so successful is that all of the music works without having the visuals to accompany them. Film Music: 1976 – 2020 does not hit every genre, but there is a diversity to the music found throughout.

Eno has contributed to hundreds of films and has released a number of standalone soundtracks. Film Music: 1076 – 2020 is a wonderful album, and a great example of how good a compilation album can be when care is taken and thought is given to the collection.

Born and raised in Whitby, Aaron discovered music through his love of The Beatles. This led to a career in radio, writing for various publications, and ultimately a radio show about The Beatles (Beatles Universe), which ran for over four years. When not immersed in music, Aaron enjoys spending time with the loves of his life -- his wife Andrea, and daughters Emily and Linda (all of whom have an intense love of music too).
RELATED ARTICLES
album reviewalbum reviewsbrian eno
10

by Ljubinko Zivkovic on December 5, 2020
Billie Holiday Billie: The Original Soundtrack Verve Records What can you say that has not already been said about Billie Holiday, one of the best–if not the [...]
7.0