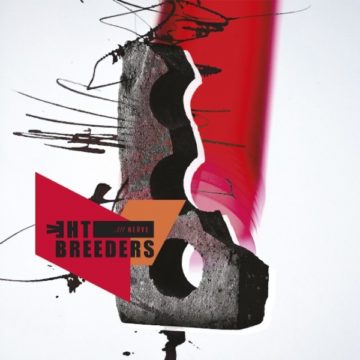 The Breeders
All Nerve
4AD

The Breeders’ fifth album is also their first in a decade, and most notably, features the complete line-up behind one of the most iconic albums from the grunge-era 1990s, Last Splash.  Grunge producer extraordinaire Steve Albini was also involved in production for a handful of the album’s songs; all that aside, a re-hashed 90s nostalgia album this is not.  All Nerve is not a resounding success, but it carries its own weight, and is delivered with both quality and the trademark vocal sneer that the Deal sisters, Kelley and Kim, have made famous.

Perhaps the most interesting aspect of this album is not only how it begins (misleadingly softly) but how it seems to define itself, which at its very least is decidedly reflective. There is even a tenderness and emotional introspection at work here, which are not necessarily what the average listener would attribute to The Breeders. Album opener “Nervous Mary” begins softly before launching into distorted guitar, but both “Spacewoman” and “Dawn: Making an Effort” seem crafted around an emotional maturity that gives the album unexpected tonal differences and overall balance, especially when set up against the rest of the guitar and bass-driven songs on the rest of the album. Long-time fans of the band need not be worried, as there is thud and thunder aplenty, but this tonal shift towards softness is definitely notable.

Of course, it is the louder and more urgent punk-influenced songs that form the bedrock of the album, and though there are a few misses (The Breeders do post-punk, “Metagoth”, the most jarring) overall there is no illusion that this is a band that has any desire to turn the distortion off or the volume down. “Howl at the Summit”, featuring vocals from Courtney Barnett (like Barnett’s new single, “Nameless Faceless”, which features backing vocals from Kim Deal) is the album’s standout both vocally and instrumentally, though “Archangel’s Thunderbird” is also fantastic.  At their best, both the vocals and the instrumentation are jarring enough to grab the attention and pull the listener into the song, and of course are reminiscent of the bands’ roots and early successes.

Though it is not necessarily one of the album’s strengths overall, the song that leaves the listener with the most to think about may be the album closer, “Blues at the Acropolis” which seems to put the idea of present-day social concerns up against the concepts and legacy of history.

Overall, this album is vital and loud enough to fit comfortably into the band’s catalogue, but it is also more introspective and thoughtful than is likely expected, which is a definite strength.  Here’s hoping that it is also the motivation needed to make sure that we don’t wait another decade for their next album.

Br. lives in southern Ontario, grew up on The Beatles and The Journeymen, spent his adolescence immersed in grunge, and his adulthood in British alternative. His greatest joy is seeing his son dance and grow into his own appreciation of the indescribable joy of music...
RELATED ARTICLES
4adalbum reviewsthe pixies
6.0