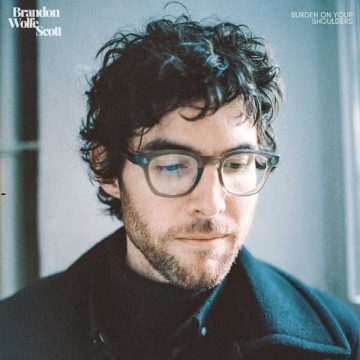 Brandon Wolfe Scott is a familiar name to all those who have been following Kelowna, BC ‘bigwigs’ Yukon Blonde.  While in the band it is Jeff Innes who handles most of the songwriting duties, Scott’s new EP Burden on Your Shoulders gives the guitarist/vocalist a chance to show off what he is made of.

The immediate verdict – Scott’s got it!

While the band took a break from touring early last year, Scott retreated to his living room where he recorded these five songs. And while it should have sounded like a lo-fi bedroom thing due to minimalistic recording conditions, Scott actually comes up with quite a big spacious sound here.

No wonder, since he took his queues from the ‘70s big pop rock names such as George Harrison and Todd Rundgren, passing them through his personal musical filter. This personal touch certainly gave this ‘70s vision a modern, current outlook. It not only shows that Scott has great songwriting chops, but that he certainly hasn’t forgotten his guitar and vocal skills.

Formerly a lot of things, including a journalist and a translator, currently a freelance writer living in The Netherlands.
RELATED ARTICLES
album reviewalbum reviewsbrandon wolfe scott
8.0