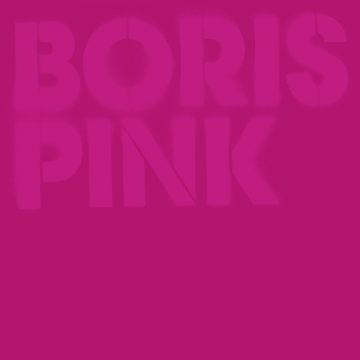 Boris’ Deluxe Edition release of Pink begins, as it did 10 years ago, with a goodbye. Thankfully for us listeners, their farewell was only ever fictional.

There are other moments in the Boris discography that impress – most notably the brooding, subterranean Flood (2000), the apoplectic Aluma no Uta (2003), and the kraut-influenced hypnotism on Amplifier Worship (1998) – but Pink is the core of the apple. In fact, it’s so pithy and condensed at times that one feels compelled to slap & smooth a Garage Rock label on the whole thing, if only for sake of tidiness. But this is not garage rock; not any more than it is metal or post-rock or shoegaze or noise. This is the primary virtue of Pink: it resists subgenre.

Opener “Farewell” is still, even on this deluxe expansion LP, the most structurally ambitious track on Pink, pouring over sonic edges like a writhing, senseless Sigur Ros ballad. This tunes the ears of the listeners to the sweet yet brittle frequencies that follow. Immediately after is the titular “Pink” which is more representative of the album as a whole, and reaches levels of stoner-rock immaculacy that remind this critic of an angry Ty Segall.

A bit later we get “Nothing Special” which sounds like a tribute to the elusive psycho-rock of Hot Chang’s The Totality of Chang (1998), but misses the electronic element. The fascinating gear-down to slumbering doom metal on “Blackout” still feels jarring, though the effect is mitigated by what comes next: the stinging “Afterburner,” a track that lies at the crossroads of Piper-era Pink Floyd and “When The Music’s Over” by The Doors, with its hallucinogenic echo-claps and vocal warps.

Then there are the others: the groovy interlude “Electric,” the dumfounding “Pseudo Bread,” the Jesus-and-the-Mary-Chain-on-a-skidoo “Six, Three Times,” the ambient meditation “My Machine” and the carpe diem eruption “Just Abandoned Myself” which, at a towering 18 minutes, is a fast-forward cavalcade of distortion and feedback, of canvas-breaking drums and lamenting vocal harmonies. It evolves into a kind of raga groove at the 7 minute mark before slowly disintegrating into a sinewy river of – and I say this with veneration – pure noise.

Instead of ending on the 18-minute monster “Just Abandoned Myself,” Boris pluck nine more tracks from their archive and appends the album with them. This transforms the ostensibly prosaic into the pointedly de-luxe.

Your Name Part 2 is a slow-core piece which opens the next nine tracks up – nine tracks which are simply icing on top of icing. Of these nine, the most impressive are “Room Noise,” which summons pulsing pathos from a small loaf of ascending guitar work, and the guttural “N. F. Sorrow” which spends its entire 7 minutes in what feels like 30 seconds. Rounding the whole thing off is the forlorn guitar poem “Tiptoe” – a gossamer of gentle feedback.

Boris have collaborated with the titanic Keiji Haino and, recently, Merzbow, a godfather of the Japanese noise tradition. The company they hold speaks to their esteemed seat in the noise rock theatre, and a reissue like this, while only a decade delayed, feels well earned. Looking down the line, one can clearly see how Deafheaven, I Am a Lake of Burning Orchids, and late-period Godspeed You! Black Emperor, among others, tilted their rudders in the noise-gaze wake that Boris’ body of work left behind.

More carping listeners will gawk at the lack of experimentation (which is to miss the driving ethos of the work) and more fawning listeners will claim a rebirth of the noise-rock canon (which is to dry hair by lighting it on fire). The takeaway, if there is one, is that Boris’ Pink (Deluxe Edition) is a collection of songs, the qualities of which culminate into something critics have been and will continue to call “seminal”. This is partly due to the way tropes of metal and garage-rock are made miscible with shoegaze and noise. It is also because the drums, guitars and vocals sound at once peloothered and mathy, sloppy and astute; Pink is provocative yet easy to digest.

This decade’s beating winds have extinguished the flames of many “classic” albums – Arcade Fire’s Funeral (2004), Green Day’s American Idiot (2001), The Flaming Lips’ Yoshimi Battles the Pink Robots (2002), to name a few. But Pink, by being as mutable as the very winds that berate it, will burn its amps until the power goes out.