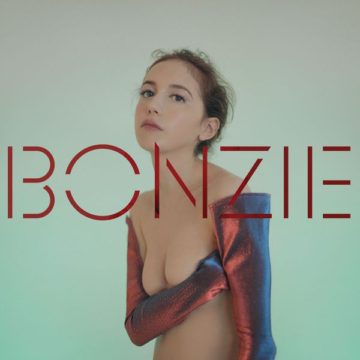 On Nina Ferraro’s latest release as BONZIE, we are given a glimpse into the next step in the evolution of a singer-songwriter.  Zone on Nine is by far BONZIE’s most ambitious and eclectic release to date. Within its varied twists and turns is an album that is simultaneously personal and bizarrely ethereal.

Ferraro has self-confessed that her influences are eclectic. They include “Tchaikovsky, Gil Scott-Heron, Judee Sill, and the score to Disney’s Mulan.” Drawing from these wildly differing influences has allowed Ferraro to create an interesting album that is difficult to pin down to just one genre. At moments she sounds archetypically singer/songwriter while at other times BONZIE’s sounds veer drastically into dream pop or even surrealist pop. Zone on Nine was co-produced by BONZIE, Jonathan Wilson who has worked with the likes of Father John Misty and Conor Oberst, and Ali Chant who has previously worked with Perfume Genius and Youth Lagoon. Additionally, the album features musical contributions by Adrian Utley of Portishead. While recording Zone on Nine in Los Angeles and England, Ferraro was exposed to influences from the locations alongside the influence of her musical compatriots.

Zone on Nine is really quite a smorgasbord of sounds and while it isn’t necessarily cohesive it does have moments of clarity. On the opening track “Crescent,”  intimate vocals and a guitar break away to reveal a complexly textured steel guitar-laced song. The intensity of this initial track is nicely sustained across the first few songs which include the intimate and delicate “If I Could Reach You” and the hazy acoustic guitar heavy “Combback.” Later in the album, the title track roars anthemically as swirling synths intermingle with a grooving bass and Ferraro’s vocals. Following up this anthem is the rather sweet waltz that is “Tiny.” These differing songs often echo the art-pop stylings of acts like St. Vincent or Kate Bush while still demonstrating new creativity.

Lying at the end of the album is “Epilogue” which returns BONZIE to her singer/songwriter roots as her gently cooing vocals are complemented by a vintage-sounding organ and rather stripped-down guitars. This penultimate song is a lovely closer that completes the album nicely and leaves listeners with a pleasant summary of the preceding forty minutes.

Taken in its entirety Zone on Nine is an album that certainly shows growth for Chicago-based BONZIE. Its varied menagerie of sounds creates an eclectic soundscape that bounces effortlessly off genres. This slightly unpredictable nature makes Zone on Nine an intriguing listen that seems to lack a singular direction.

I am an Edmonton based musicophile and photographer who loves experiencing music whether it's live or on my turntable. I play seven instruments and go to a lot of concerts.
RELATED ARTICLES
album reviewsmodern pressurewhat's to become of the meaning of love?
7.0