SPILL ALBUM REVIEW: BONNIE TYLER – BETWEEN THE EARTH AND THE STARS 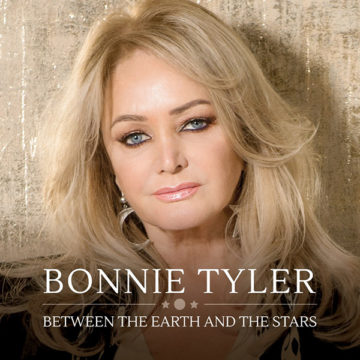 Bonnie Tyler
Between The Earth And The Stars
earMUSIC/Edel

Between The Earth And The Stars is Bonnie Tyler’s 17th studio album, and her first since 2013’s Rocks and Honey. All that to say that this is an artist who has a fantastic catalogue behind her and a new album is always welcomed. However, Between The Earth And The Stars may not be the album we have been waiting for or expecting, especially given that David Mackay (who produced her first two albums) is in the producer’s chair.

The problem is that it seems there is more concern about keeping Tyler contemporary and a hit making machine, rather than letting her do what she does best. The guest stars are somewhat ill advised, as Rod Stewart (who duets on “Battle Of The Sexes”) and Cliff Richard (who fairs a bit better with “Taking Control”) add very little. Neither song is up to Tyler’s previous standards and become a showcase as opposed to a solid song. Barry Gibb contribution “Seven Waves Away” is more of a background noise than anything demanding of your attention. The one guest star that does make sense, and adds a great deal, is Francis Rossi, who plays on the highlight of the album “Someone’s Rocking Your Heart”. Here Tyler sounds much more at home and it is a terrific song.

There is nothing wrong with Tyler’s voice. If anything, it has gotten stronger over the years and she sounds fantastic. The problem is the choice of songs. When they are good, they are great. “Older” and “Don’t Push Your Luck” are perfect for Tyler and they sound fantastic. However, a great part of the album is middle of the road pop, and few songs jump out and grab you. Also, this is a collection of songs rather than an album. It is custom made for streaming and picking and choosing, and Tyler has a history of making strong albums that play as albums.

Although it is somewhat disappointing, it is great to have Tyler back. Between The Earth And The Stars is not the album we have been waiting for, it is still brilliant to have something new from Tyler. She is a ground breaking, talented, creative singer. This album does not allow her to demonstrate all of her strengths.

SPILL ALBUM REVIEW: BONNIE TYLER – BETWEEN THE EARTH AND THE STARS

Born and raised in Whitby, Aaron discovered music through his love of The Beatles. This led to a career in radio, writing for various publications, and ultimately a radio show about The Beatles (Beatles Universe), which ran for over four years. When not immersed in music, Aaron enjoys spending time with the loves of his life -- his wife Andrea, and daughters Emily and Linda (all of whom have an intense love of music too).
RELATED ARTICLES
album reviewalbum reviewsearmusic
9.0