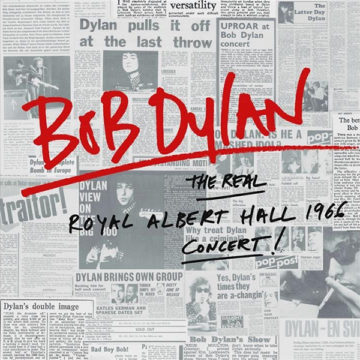 Growing up in the sixties, like I’m sure for many others at the time, Bob Dylan was my poet. Hell, I guess I even idolized the guy in a way only a teenager can. Seeing him arm and arm on the cover of The Freewheelin’ Bob Dylan album with girlfriend Suze Rotalo walking the frigid streets of New York, made a kid from the suburbs of Toronto green with envy.

All these memories came flooding back listening to Bob Dylan Live 1966 at the The Royal Albert Hall Concert CD, where Dylan was at his absolute creative prime after hooking up with his backup band The Hawks from Toronto, that later had their own success as The Band.

For the first seven songs included here, like “She Belongs To Me,” “It’s All Over Now Baby Blue” and “Just Like a Woman,” Dylan accompanies himself alone onstage with only his guitar and harmonica. For the final eight songs, though, including “Leopardskin Pillbox Hat,” “Ballad of a Thin Man” and “Like a Rolling Stone,” Dylan is accompanied by his new band at the time, which included Robbie Robertson (guitar), Garth Hudson (organ), Rick Danko (bass), Richard Manuel (piano) and Micky Jones (drums).

This 15-track CD is a genuine piece of musical history that captures Dylan’s transition from a well-respected folk artist to a bonafide commercial rock artist, a transition many of his folk fans weren’t happy with.

Gerry Young is President of Current Records and Management, and author of the 2011 biography Pop Goes The Weasel: Rock And Roll Off The Record, available at Indigo/Chapters, Barnes & Noble, and Amazon.com. He has recorded and managed Juno Award winning bands Martha And The Muffins and The Parachute Club among others.
RELATED ARTICLES
album reviewsbob dylansony music canada
7.0