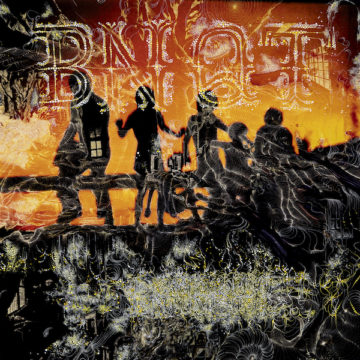 A supergroup of sorts, featuring five vocalists from some very respected and much loved bands.  BNQT (pronounced ‘banquet’)  features Ben Bridwell of Band of Horses, Alex Kapranos of Franz Ferdinand, Fran Healy of Travis, Jason Lytle of Grandaddy, and Eric Pulido of Midlake.

Pulido came up with the idea to approach vocalist from bands with whom Midlake had toured to form a band. Each member contributed two songs and Midlake serves as the backing band for the recording,

Is this the ‘indie’ version of the Traveling WIlburys (the album title is surely a tipoff to that classic supergroup)?  I don’t think they are this generation’s Traveling Wilburys, nor do I think they invite such comparisons, although “Real Love” has a title that borrows from The Beatles and does sound like a long lost WIlbury track.

This is an album made by five individuals, each with their own style, their own history and their own idea of how songs should sound.  And as different as each artist is, it is somehow a cohesive album.  There are stronger songs that others, but overall, the album works.  Perhaps it is not as classic as fans would hope (or expect), but there is plenty here to keep fans happy.

Perhaps the fact that Midlake is the backing band, and Midlake’s Pulido had the original idea keeps the album consistent and whole.  And to their credit, it does play as an album.  The best way to listen to this album is to drop the needle on side one and let it play.

The music and lyrics are reminiscent of the 1970’s, essentially making this album sound older than it is and from a different era.  They are not jumping trends, but rather paying tribute to their bands that seemingly influenced them.  This works in their favour as the music does not sound dated and will age well.

The record itself is extremely well produced.  With the horn arrangements and overall sound, it sounds almost like the Wall of Sound, but in today’s music world.  As would be expected the vocals are strong and the music and vocals compliment each other very well.

The down side of the record, for me, is although it does not sound dated, there is little experimentation with their sound, and at times it does sound derivative and not as original as I would hope.

There are great moments here, but given the talent involved, those moments should have been more consistent and plentiful.  But as stated it is a very good album and perhaps Volume 2 will give the guys the freedom to be more themselves.

Born and raised in Whitby, Aaron discovered music through his love of The Beatles. This led to a career in radio, writing for various publications, and ultimately a radio show about The Beatles (Beatles Universe), which ran for over four years. When not immersed in music, Aaron enjoys spending time with the loves of his life -- his wife Andrea, and daughters Emily and Linda (all of whom have an intense love of music too).
RELATED ARTICLES
album reviewsband of horsesfranz ferdinand
7.0