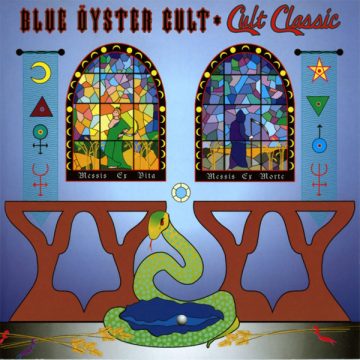 Cult Classic is an album of remakes and remasters of better known Blue Öyster Cult songs. The band does nothing to enhance the songs, in fact they sound extremely close to the originals, with the exception of the ‘TVixes” of “Don’t Fear The Reaper” and my favourite, ”Godzilla”. These are bonus tracks and add very little to the album. In reality, they are more or less instrumentals of the original songs.

There is little point to this album. At the time of recording it, Blue Öyster Cult had a new lineup and were signed to a new label, which provided them with the band’s most well-known songs. As far as replicating the originals, this lineup does an admirable job, but again for the casual fan, this album makes little sense.

Collectors will be happy with this rerelease. Cult Classic has been in and out of print over the last 16 years, and here it is for the most ardent fans. To Blue Öyster Cult’s credit, they are making sure their music and albums are available to fans. To that end, it is part of a very successful rerelease campaign.