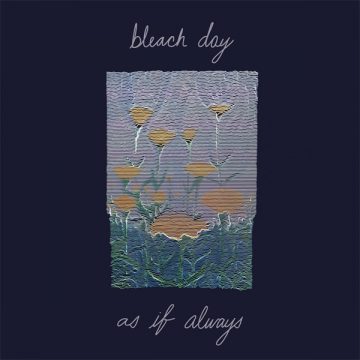 Bleach Day
as if always
Birdwatcher

Vermont duo of Loui Kiley and Vinny Marksohn, aka Bleach Day released their sophomore album as if always when COVID-19 was still ‘something distant’ on some other shores. In other circumstances, this melancholic, low-key effort might have gone unnoticed among the glut of Bandcamp releases. Now that practically everybody has to stay home and listen to music, among other things, they might have a chance.

And they should. The duo recorded and produced the album along with all their other musical projects. As they say, they have been “been perpetually occupied in their newly fortified analog home studio.” It took them two years to come up with the new album.

Looking at the fact that the eight racks on as if always clock in at under 28 minutes, some might pose the question what took Kiley and Marksohn two years to do it. Listening to the album though, you quickly realize it was not the other projects that were distracting them.

Bleach Day come up with some sublime, layered music that on its surface sounds quite simple. But as the album evolves, all its intricate elements start cropping up, pushing you to press the repeat button or place the tonearm on the record over and over again. It’s worth it.