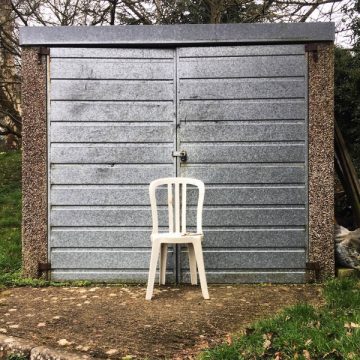 Over the last nine years, Neil Arthur has been releasing records under the Blancmange banner, and although he has had many artists playing with him on the records, it really is his project. Often, an artist will record more material than goes on the album, and these songs get lost over time. Waiting Room (Volume 1) is a collection of such songs. For the record, Waiting Room (Volume 1) focuses on the last three years’ worth of albums recorded as Blancmange.

The album came about very quickly and as a response to the chaos of the times. Having some time on his hands, as his upcoming tour in May had to be postponed, Arthur and his manager, Steve Malins, put the album together in about 48 hours, from picking the tracks to final mastering. In doing so, the songs have been sequenced in such a way as to create a flow. This may be a collection of unreleased songs, but for my money, it is a new Blancmange album. Quite remarkable, since a new Blancmange album, Mindset, is due for release in May.

It must be clear that these songs did not make it on albums due to many reasons, but the quality of the songs are not a question. Listening to Waiting Room (Volume 1) one wonders how these songs slipped through the cracks. There is not a weak song in the collection. Each track is pure melodic electronica. Opening track “Once Upon A Summer Morn” is a creative and intriguing instrumental which leads nicely into the rest of the album. It ends with one of the best songs Blancmange have released, the breathtaking “3 Minutes”. It simply must be heard, with an incredible melody and lyrics that cut through to your soul.

Arthur sounds fantastic and has a way of writing lyrics that allows the song to be interpreted in many different ways. One thing is for sure, one is never bored. Arthur, who wrote, produced and played everything deserves a great deal of credit for the music found on this record.

This is a very welcome addition to the ever-growing Blancmange catalogue. It is full of great songs, inspiration, clever lyrics, and melodies that burrow themselves into the listener’s brain. It is quite an achievement. Waiting Room (Volume 1) is a fascinating album from an ever-evolving and growing artist. If we have to self-isolate, I can’t think of a better soundtrack.

Born and raised in Whitby, Aaron discovered music through his love of The Beatles. This led to a career in radio, writing for various publications, and ultimately a radio show about The Beatles (Beatles Universe), which ran for over four years. When not immersed in music, Aaron enjoys spending time with the loves of his life -- his wife Andrea, and daughters Emily and Linda (all of whom have an intense love of music too).
RELATED ARTICLES
album reviewalbum reviewsblanc check records
10