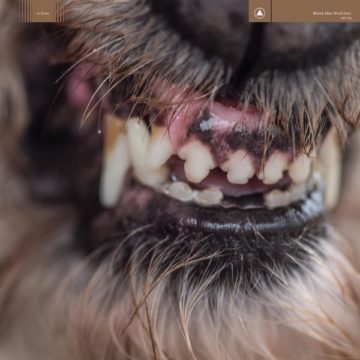 Blanck Mass presents us with a schizophrenic, maddening record that takes us on a roller coaster ride with intense heights and trance-like troughs. The opening track “John Doe’s Carnival of Error” does the deed of slowly introducing us to the realm of World Eater with a somewhat beautiful and mysterious synth that can easily get stuck in ones head. But the progression begins to drop us into the other side of the record that those unfamiliar with Blanck Mass will be gripping their chairs to. The unrelenting bass kicks and saws of “Rhesus Negative” transition and juxtapose with the previous track perfectly, and ready the listener for the rest of the album. It’s jarring and gets your blood boiling to the point of emotional, ear straining exhaustion but manages to fit in a key melodic structure throughout the piece that keeps the track strangely palatable. We take a trip back to the soothing synths with “Please” but with more emotional depth and a combination of claps, kicks and reverse snares to nod your head to. It is here when the record reaches its most memorable and euphoric state, only to be transitioned back into the chaos by “The Rat” and then back out with ‘Silent Treatment’, but certainly not in a bad way. Closing out the album we have two tracks that truly encompass and summarize the trip the record puts you on. In “Minnesota / Eas Fors / Naked”, the conflicting genres and moods are separated in the timeline with the ear melting drums in the beginning, an experimental soundscape of sub-bass, chimes and chord progressions in the middle, and a distorted, radio-recording-like groove sequence at the end. In comparison, Hive Mind meshes everything together from dance worthy drum patterns, vocal chopped melodies, head pounding kicks and even the dreamy harp-esque plucking. Blanck Mass clearly knew what he wanted to do with World Eater and he does it almost effortlessly. The album combines two sides of the emotional and even musical spectrum into one unique cluster of a project that is still oddly cohesive and seamless. Even through the punching drums that fill many of the tracks, the harmonies and melodic journeys mold the overall aesthetic of the piece together. It’s an album that pushes the envelope for the experimental electronic genre, while still having a motive behind every sound, composition and layer.

Justin is a videographer, photographer and filmmaker from Niagara Falls, currently studying Film Studies at Ryerson University. With a passion for electronic music and the art of film, he combines the two together to bring the life of a concert and festival to your screen through visual mediums and live reviews.
RELATED ARTICLES
album reviewspleasesacred bones records
8.0