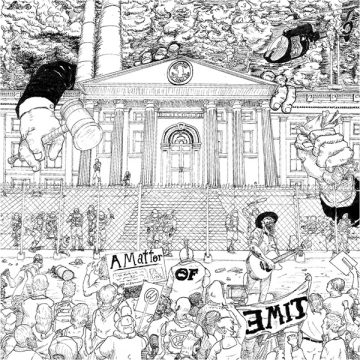 Of the vast, rich, and diverse Toronto music scene, few artists get me as excited as Black Suit Devil. Following his incredible 2017 debut, The Freedom Sessions, the singer-songwriter has reconvened with a band for his follow up release, A Matter Of Time. A strong departure from the acoustic roots of its predecessor, the ten-track album is a musical journey that confidently refuses to remain still within the confines of one style or another.

What I once compared to the acoustic material by Chris Cornell and Dallas Green, A Matter Of Time kicks off with the title track and lead single. Within its opening notes, it is clear that the sophomore release from Black Suit Devil is a drastic departure from his past work. In place of a crisp and cutting acoustic guitar and gruff vocals is a full band performing in a grungy variation of the New Orleans jazz tradition. The track is accented by warm, swelling horns, and interestingly led by raspy and gravelly vocals to create a grimy vibe within a big band setting. Quite contrastingly, the second single, “Firefly”, is a vintage roots rock banger in tone with Neil Young, The Stones, and The Black Crowes, and features a who’s who lineup of Toronto talent, including vocalist Mae Cromwell of Grace, guitarist Nelson Sobral of The Celebration Army, Juno Award-winning organist Lance Anderson, and percussionist Tanya Porter of The River Pilots.

Beyond the singles, however, A Matter Of Time feels more connected to The Freedom Sessions than one would expect from the singles that open the album. Yet again, Black Suit Devil proves to be a cut above most of his peers among the modern folk and singer-songwriter scene as he intentionally avoids current indie folk, rock, and pop trends by taking a far more classic approach. Songs like “January”, “Queer Boy Blues”, and “Heart Of Sin” all stand as excellent examples of the folk rock that can be compared to the likes of Young and Robbie Robertson. All round, the music feels carefully curated and eclectic.

Black Suit Devil effortlessly sets himself apart from his peers and his past work alike on this brilliant release. Few could deliver such a contrasting record while maintaining a sense of cohesiveness, yet this is achieved and stands as an integral part of the artistry behind the album. Ultimately, A Matter Of Time stands as an incredible achievement for Black Suit Devil as he continues to push the boundaries and possibilities for independent singer-songwriters.

A passion for music has always been a part of Gerrod’s life. As a young boy, he was raised on a steady diet of the music from The Chili Peppers, Aerosmith, The Stones, Prince, and others from his mum. Raised in the GTA, Gerrod continued to foster his love for music by attending a wide range of concerts and learning the drums. His unapologetic passion for music has no bounds and has spread to a wide variety of styles, whether it be the 90’s rock that sound tracked his teenage years, the jazz he studied in university, or his newfound love for hip-hop. He recently received his bachelors in music and education from York University and is passionate about writing and reviewing good (and less than good) music. Gerrod is also the drummer and songwriter for a Toronto based rock & roll band, One In The Chamber.
RELATED ARTICLES
album reviewalbum reviews
10