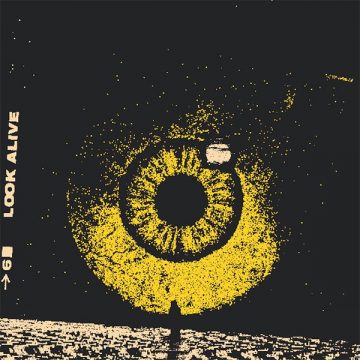 Black Pistol Fire, the Canadian-America hard-blues power duo from Austin, Texas, has returned with their long-awaited sixth album, Look Alive. The eleven-song studio record follows their successful 2017 release, Deadbeat Graffiti, and continues to build on the band’s impressive discography by kicking the doors down on 2021.

Opening with “Look Alive”, the haunting title track starts the album on a suspenseful and reflective tone that indicates a level of sophistication in the band’s songwriting.  By the time the chorus hits, the tones and effects wash across the soundscape in a flood of carefully curated and vintage sounds. The laid-back track carries a sense of intensity, juxtaposing the nonchalant vibe, and feels reminiscent of both Queens Of The Stone Age and Arctic Monkeys. While the modern alternative rock vibes would continue throughout the album, “Pick Your Poison” returns the duo to their classic blues rock sound with a gritty shuffle and a confident strut.

Just from the first pair of songs, Black Pistol Fire will have you hooked. Look Alive is a stand-out release with a number of highlights, despite a small handful of songs meandering in middle of the road, alt-rock/pop territory of the last decade. The funk jam, “Never Enough”, certainly comes to mind as a dynamic, uptempo track that is equal parts pop as it is alt-rock – think a bluesy Maroon 5 with actual musical integrity. The melancholic swagger of “Hope In Hell” further emphasises the blend of alternative and blues influences in a refreshing manner. While the opening two songs also stand among the best, Look Alive offers, the explosive “Black Halo” and the gritty “Temper Temper”, also shine especially bright; however, none come close to the fiery energy of their renowned live show as “Level” – an incredible track by any measure that I cannot wait to see come to life in a packed club when concerts return.

Only a month deep in the new year, Look Alive stakes a strong claim to make 2021 the year Black Pistol Fire truly break into the mainstream as a top tier rock band, equipped with enough blues riffs and a modern alt-rock songwriting approach to set the bench mark for both genres for the coming decade. While I’d prefer a less compressed and bigger sound from a band like this, their sound is sleek and in keeping with the times. If Look Alive is any indicator, Black Pistol Fire have perfected their seamless blend of blues and alternative rock, making a unique sound that is distinctively theirs. As a result, the album is at its strongest when both sides of their sound are equally emphasised or when they dig deep into the blues. Regardless, Black Pistol Fire has delivered a fantastic and modern take on the blues with Look Alive.

A passion for music has always been a part of Gerrod’s life. As a young boy, he was raised on a steady diet of the music from The Chili Peppers, Aerosmith, The Stones, Prince, and others from his mum. Raised in the GTA, Gerrod continued to foster his love for music by attending a wide range of concerts and learning the drums. His unapologetic passion for music has no bounds and has spread to a wide variety of styles, whether it be the 90’s rock that sound tracked his teenage years, the jazz he studied in university, or his newfound love for hip-hop. He recently received his bachelors in music and education from York University and is passionate about writing and reviewing good (and less than good) music. Gerrod is also the drummer and songwriter for a Toronto based rock & roll band, One In The Chamber.
RELATED ARTICLES
album reviewalbum reviewsblack pistol fire
8.0