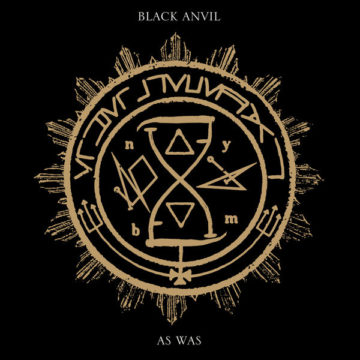 Black Anvil
As Was
Relapse Records

New York’s Heavy Metal band Black Anvil released their latest album As Was last month, a follow-up to their 2014 album Hail’s Death. Their most progressive album to date, As Was is a 50-minute face melting reminder of all the good things metal music has to offer.

Formed in 2007, Black Anvil has been gaining a reputation for their aggressive guitar riffs, epic death growl, and their stunning stage presence. While the hidden gem As Was features the dark and energetic guitar and drums, and, of course, the dominant death growl, and opens as such, there are some interesting reprieves of softer music throughout the album.

Take, for example, the title track “As Was”. The intro features a softer and slower distorted guitar solo that draws the listener in. As the song progresses, the slow tempo keeping the momentum throughout, the listener is treated to the lead vocalist’s melodic singing before switching to the death growl. The flexibility and dynamics of the vocals are impressive. It is the bridge of the track, however, that ultimately captivates the ear. The melody is almost soothing and the vocals during this part border on angelic. But the bridge only lasts a moment and the tracks plummets into the faster and more aggressive tune. This leaves “As Was” feeling like a robust track, featuring small moments of beauty amid the darkness.

The album continues on in this fashion, balancing the typical harshness of the heavy metal sound with subtle moments of softness. To go along with this theme, the album even features a softer instrumental track that borders on psychedelic rock just before the album reaches the climax in the final track. “The Way Of All Flesh” is a simple guitar piece that last only a couple of minutes. While some may find the interruption of the rough flow of the album jarring, it feels almost like the sun breaking through the rain clouds. This brilliant track placement gives the final track that powerful punch that would be expected from a climax to such an epic album.

“Ultra” concludes the album with a compendium of all that makes Black Anvil an impressive heavy metal band. The track is a mess of sounds that come together to create an amazingly epic ballad. Much like “As Was” the vocals flint between the almost angry death growl and the melodic singing that is still a shock. However, it is the conclusion of the track, and the album, that will leave listeners stunned. The Gregorian-esque Latin chant paired with repeating lyrics in that angelic vocals is in stark contrast to the harsh opening of the album. And as the last notes slowly fade away, audiences may feel an uplifting sense of relief, a cathartic void as any pent up aggression leaves the body, and, ultimately, audiences will feel a sense of total finality.

Music has always been a big part of Samantha’s life. Whether it was singing with a choir, reading music and playing instruments, or staying up well into the wee morning hours just to listen to the international music program on the radio, for Samantha music was as essential as breathing. One day, Samantha noticed that writing, her other obsession, always seemed to flow alongside music, and the two elements of Samantha’s life co-mingled for years. While at university, Samantha discovered that her passions could be put to use, and she embarked on the path of a music journalist. To date she has written many music reviews, news posts, and interviews and so far her work has appeared in The Voice Magazine, The Scene Magazine, and The Spill Magazine, as well as on her own website.
RELATED ARTICLES
album reviewsas wasblack anvil
9.0