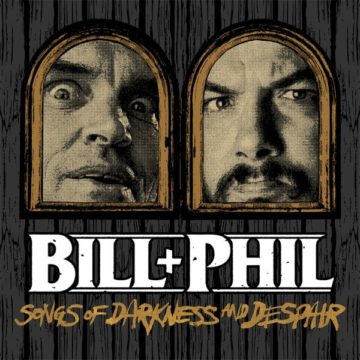 Something dark and heavy emerged this week from the minds of an unlikely duo. Bill Moseley, a cherished horror-film figure with a cult following, and metal icon Philip H. Anselmo of Pantera and Down fame give us a brand new 6 track collection, Songs of Darkness and Despair. The duo’s recent and unexpected collaborative effort, known simply as Bill & Phil, showcases an eclectic selection of songs, featuring the eerie lyrics and vocals of ‘Bill’ and the instrumental performance and composition of ‘Phil’. This release is a truly unique addition to both Bill and Phil’s bodies of work, and will surely excite both members’ dedicated fans.

The members of this duo are not novices to their crafts by a long shot; both Bill and Phil have significant fan bases and have extensive experience collaborating with different artists to create a wide range of content. Songs of Darkness and Despair is the product of two friends experimenting and playing off each other’s ideas. Every song began with completed lyrics by Bill Moseley, followed by Philip H. Anselmo creating music that he felt complimented the tones and ideas of the lyrics. The whole thing came together organically, and the drastic changes in composition from track to track make sense when listening to the lyrics and how cohesively they play with the instrumentals.

The album starts off with the most straightforward metal/heavy blues-rock song, “Dirty Eye”. This tune is musically centered on a steady guitar line that chugs along with the occasional blues riff. Of all the pieces on the album, this track’s instrumentals are most reminiscent of Phil’s past work with Pantera. Bill’s vocals soar above the mix with his unusual, nasally timbre, belting out some of the more obscure lyrics. The energy is then brought down for the next track, “Corpus Crispy”. This song is all about building an atmosphere: dark minor guitar riffs, sitars, and eerie piano ring out from every corner, creating an uneasy vibe. Bill’s lyrics on this track, although still obscure, are more vivid, and conjure a whole range of strange visuals in your head as he describes the creepy goings on in the fictional “Corpus Crispy”.

The guys make sure to remind us of the despair we were promised in the album title with the rage filled “Catastrophic”. There’s a more straightforward concept to this piece as we hear the anger of this song’s working class, down-on-their-luck character vent their frustrations through hateful ranting. As Bill repeats, “At least save our fuckin’ children” over and over, his anger seems genuine. The darkness continues with the bleak yet surprisingly soft and melodic, “Tonight’s the Night We Die”, showcasing Phil’s compositional range. The collection is finished off with a bit more hate on “Bad Donut”. Drums gallop along with a mess of sludgy guitar riffs melding together beneath Bill’s spoken lyrics, which describe, in as many ways as possible, his disgust towards an unknown character. As he repeats the hateful and comical metaphor, “you’re the bad donut at the bottom of the box”, we can’t help but have fun with the rage.

Songs of Darkness and Despair is a genuinely fun trip through the sometimes depraved, but always-impressive minds of Bill Moseley and Philip H. Anselmo. This collection of songs is nothing groundbreaking for a duo with so much iconic work already under their belts, but it will definitely be

an exciting release to their loyal fans. It’s a unique piece of genre work that may just cause you to enjoy a little bit of darkness and despair.

Growing up in the dull suburbs of Southern Ontario, Elijah gravitated towards the city at a young age. With a healthy addiction to live music, and a constant itch for discovering his new favourite band, he finds himself happily submerged in Toronto's music scene. With his work appearing thus far in Sock Monkey Sound, and The Spill Magazine, he's going to keep this writing thing going for a while.
RELATED ARTICLES
album reviewsbill & philbill moseley
7.0