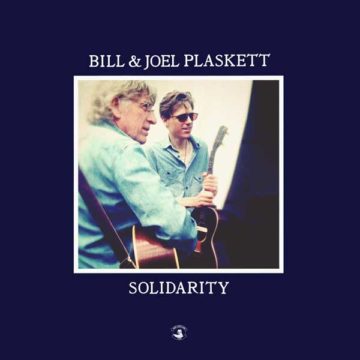 When attempting to make an album with your father, folk is the best choice of genre. It is one of the only types of music which transcends generations, acting as mankind’s favorite method of message sending through noise. For father son duo Bill and Joel Plaskett, whom have both enjoyed their fair share of success within the genre already (Joel as an artist and Bill as the cofounder of the Lunenburg Folk Harbour Festival), the choice was truly a no-brainer. Sadly, that seems to be where the good ideas end, for their latest release, Solidarity falls flat in almost every aspect. In fact, flat is probably the most accurate way to describe this project.

The Plasketts took on an immense challenge with Solidarity. Folk is a genre centered on fresh perspectives and new ideas, which are hard to find in today’s world where every answer is in the palm of every person’s hand. Bill and Joel struggle to say anything eye opening on this album, and while they keep out of the cringe worthy lyric pool for the most part, there are times where they dip their toes. One of the worst offences comes from the chorus of the song “Blank Cheque,” which reads like a dated self-help book:

While the songs where Bill takes up the vocal duty differ from the ones where Joel does, they suffer from similar issues. Bill’s songs clearly have a Celtic, story teller feel, but one can’t help to think, after listening to tracks like “Jim Jones,” and “On Down The River,” that the world has heard this before and has heard it done better. There is no “Whiskey In The Jar” on this album, but you’ll sure find failed attempts to capture that brand of folklore.

The music of Solidarity doesn’t stand out any further than the lyrics do. While the songs vary in level of instrumentation, the song structures fail to take the music anywhere. It is as if all the ingredients for an interesting album are here but there is no follow through. “The Next Blue Sky,” is a perfect example of this. The lackadaisical strumming of chords in the intro is enough to make listeners’ eyes roll, sounding uninspired and familiar. “We Have Fed You All For 100 Years,” keeps that same uninspired feeling with a maddeningly slow tempo and the guitar part on “Help Me Somebody Depression Blues,” sounds enough like a Garageband loop to make the listener want to quit. It sounds as if the Plasketts were complacent in the father-son gimmick and never even thought about making interesting music.

One aspect Solidarity has going for it is its mix. Both Bill and Joel’s voices are given the perfect amount of reverb and presence. On “Up In The Air,” Joel gets loud for the chorus and his voice soars above the traditional Celtic instrumentation. There are no muddy parts on this album and on narrative driven tracks like “On Down The River,” the clarity is appreciated. This is an album which is hard to sit through, not hard to listen to.

There is no doubt that the Plasketts are good musicians, they certainly know how to play and record their instruments well. With the addition of some dynamics and emotion in the songwriting Solidarity could have been an album which moved the folk needle and made a strong impact. However, it settles on being average in almost every aspect.