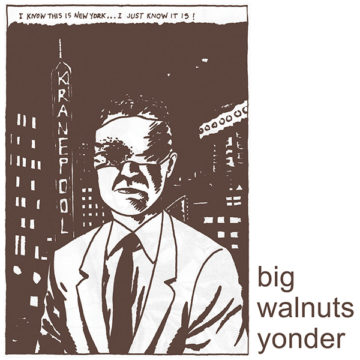 First fact about Big Walnut Yonder, it is an album by “a super group”. (“OK, so Mike Watt and the guys say it is not. The supergroup, I mean. Maybe because they themselves are aware of the possible pitfalls of such a concept and the expectations it may carry. That is why they say it is “worlds colliding”. I’d say that is just a nice way to actually explain what happens when members of known bands try to make music together. Temporarily or permanently”). Getting an album made by something called a super group is always like putting a coin in a slot machine – you’re excited about a possible win and most of the time you end up wondering why you wasted that coin when you knew in advance how it is going to end up. Of course, there’s always a chance you’ll end up a winner. As a music fan, no matter what kind of experience you had with super groups, from the time that phrase was coined for Blind Faith, how couldn’t you be excited to see together names like Mike Watt from Minutemen and fIREHOSE fame, Nels Cline (Wilco, himself and almost a dozen others), and for the more initiated Great Saunier (Deerhoof) and Nick Reinhart (Tera Melos). It is always a question what your coin will get you (or not).

Second fact – Big Walnut Yonder is an album that would usually be lumped in the so called progressive category. Now, that is a stretchy one, people put everything from Captain Beefheart (what really should be considered progressive music in my personal opinion) to a bunch of mid-Seventies British bands and musicians that I’d rather forget I had to listen to in that group. Big Walnut Yonder definitely cover both spectrum’s.

Having all these “facts” in mind, how do Big Walnut Yonder fare? Did all those coins go wasted or did those cherries line up? Well, I’d say the slot machine got stuck somewhere in between the two, leaning a bit towards those cherries, but not getting fully there. In essence, it is a mixed bag with some stellar moments.  Highlights include  “I Got Marty Feldman Eyes” (quite Beefheart-y in the best sense of the comparison) or “Ready To Pop!” (Early XTC on an additional dose of steroids).  Another example, which Rick Wakeman and his backing band would really be proud of, but I’d rather forget, the track “Flare Star Phantom” or “Raise the Drawbridges?” Luckily, it is more of the former than the latter. Of course, the musicianship is not to be faulted at any point, the question only remains whether it was used wisely throughout. Still, worth investigating.

Formerly a lot of things, including a journalist and a translator, currently a freelance writer living in The Netherlands.
RELATED ARTICLES
album reviewssargent house
8.0