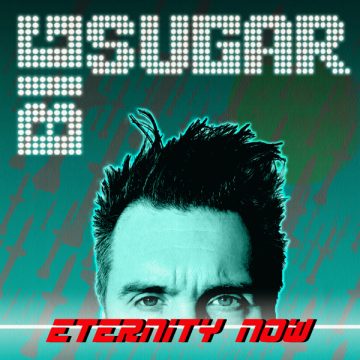 Grammy nominated  Big Sugar  returns with new record Eternity Now, the first Big Sugar album in five years. Not surprisingly, it’s kind of a mixed bag, taking into account the trials and tribulations lead vocalist, guitarist, and main songwriter Gordie Johnson has had to overcome during that time.

Following the death of longtime bandmate and Rasta elder Garry Lowe, each track on Eternity Now, mainly written by Johnson and his wife Alex, is a record of addiction, depression, self-destruction, and, finally, redemption. Recorded at his own Soundshack Studios in Austin, Texas, the opening title track is an all-out stadium rocker, featuring the guitar of Alex Lifeson of Rush. Although the next track, a cover of Gary Wright’s “Love Is Alive” is nothing special, things pick up with the next cut and first single and video, “The Better It Gets,” which will surely please all Big Sugar fans. “Wonder Woman” is another rocker with a great chorus, and “Anything Is Possible” has an ear-catching guitar groove, and some cool lyrics.

Although two tracks — “New Event Horizon” and the quirky “Ultra Violet” — don’t live up to the standards of the best cuts on the album, the very personal “Strange Spectacular” and the final track, the optimistic all out rocker “Everything You Want It To Be,” closes the album in classic Big Sugar style.

Gerry Young is President of Current Records and Management, and author of the 2011 biography Pop Goes The Weasel: Rock And Roll Off The Record, available at Indigo/Chapters, Barnes & Noble, and Amazon.com. He has recorded and managed Juno Award winning bands Martha And The Muffins and The Parachute Club among others.
RELATED ARTICLES
album reviewalbum reviewsuniversal music
8.0