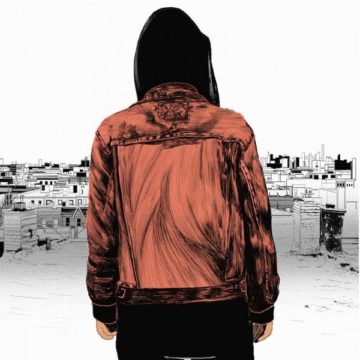 As the driving force behind Brooklyn-based rock ‘n’ roll stalwarts Big Eyes, Kait Eldridge is familiar with change. Over the course of ten years she has moved her musical project from New York to Seattle and back again. She’s endured continuous lineup adjustments. Amongst this, she’s built up an impressive catalogue and has toured with the likes of Against Me! and The Thermals. Not a bad track record for an early 30-something.

With Streets of the Lost, Big Eyes’ fourth studio LP released via Greenway Records, there is no indication of stagnancy for Eldridge. Assembling brothers Paul and Jeff Ridenour on guitar and bass, and drummer, Scott McPherson, she journeyed to Cincinnati’s Ultrasuede studios in early 2019 to record the album over the span of one week.

At 30 short minutes, Streets of the Lost is true, kick-in-your-face, New York punk grit. Sneering guitars on suitably named tracks like “Try Hard Kiss Ass” and Young Dumb and Bored” are compliments of Ridenour, who fills in as the first Big Eyes guitarist other than Eldridge to join the recording process. Eldridge’s vocals are delivered with lip-curl attitude. Though, with a tight rhythm section, harmonized leads and ‘70s rock riffage, it’s evident that Big Eyes sound has always been informed by idols who have graced The Garden as much as the Bowery. A punchier depth and clarity exist in comparison to 2016’s Stake My Claim, and more elaborate structures indicate further maturation in Eldridge’s song writing.

Named after Mary Ellen Mark’s 1983 Life Magazine photo-essay about Seattle’s homeless and conflicted youth, Streets of the Lost was empowered by Eldridge’s dive into deeper subject matter. Opener and single, “Hourglass” explores the pains of unrequited affection, while the pop-infused “Lucky You” is a sarcastic scoff at high society. This is also the first of Big Eyes’ releases in which she experiments with writing from different perspectives. Says Eldridge, “This (album) enabled me to tackle some heavier topics than those on our previous albums, which had mostly consisted of my own personal experiences”. As Big Eyes’ most accomplished work to date, perhaps change isn’t all that bad.

Matt Gilberto is a Cleveland, Ohio native and music enthusiast with a soft spot for alternative and punk rock. Life for him began in middle school when he first heard Nirvana’s In Utero. He enjoys writing, photography, concerts and spending time with friends and family.
RELATED ARTICLES
album reviewalbum reviewsbig eyes
8.0