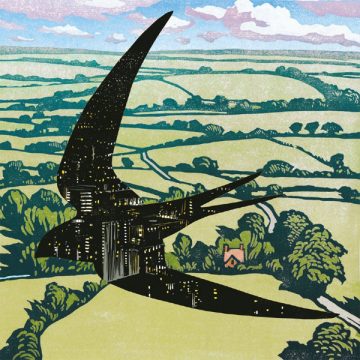 To “sleep on the wing” is a reference to a bird called a swift that is capable of flying incredible distances without ever touching ground, sometimes for months at a time, and can apparently sleep while maintaining its flight. With that in mind, arriving just over a year after 2019’s Ribbons, Stephen Wilkinson’s Bibio has returned with a comparatively shorter album entitled Sleep On The Wing, an idyllic collection of atmospheric folk that is combined with field recordings of birds and other “found” sounds from around Bibio’s countryside studio in the UK. While coming in at just over28 minutes spread over 10 tracks, what might be lost in length is made up for by the sheer serenity of it all.

Opening track and lead single “Sleep On The Wing” is one of the few songs with vocals, and is an absolutely beautiful, almost heartbreaking thing to listen to. The rolling melodies created by the strings give it a unique energy that manages to make it the musical equivalent of crying happy tears. It’s worth mentioning that the accompanying music video, directed by Sonnye Lim, artfully dramatizes its themes of escape and transcendence, and sense of leaving one thing behind for another in a way that would be difficult to do any better.

“A Couple Swim,” is similarly serene, but unlike the opener there are hints of the electronic elements that Bibio is also known to infuse his music with, and the subtle effect of little buzzes and wisps zipping through in the background present like little sonic fireflies. “Lightspout” opens with a recording of birds before a warbly, instrumental track, almost like an interlude, before “Oakmoss” picks up where “Sleep On The Wing” left off with its peaceful, rising and falling strings. “Crocus” comes off as one of the darker-toned pieces here, using bassier strings and interspersing them with the same warbly-ness of “Lightspout” while more recordings of birds twitter from the dark around the edges.

Overall, the orchestral arrangements and the subtle use of electronic elements and field recordings, as well as the overall coherence of the bucolic atmosphere from song-to-song, gives this the feel of an experimental concept album or something akin to a small book of pastoral poetry. There is a bit of magic in this one, and a lot of beauty, too.

Dan Kennard is an English teacher and fiction writer living outside Kansas City, Kansas where he lives with his wife and children. More about his work can be found at amazon.com/author/dankennard. You can also follow him on Twitter and Instagram @kennardistry or contact him at kennardistry@gmail.com.
RELATED ARTICLES
album reviewalbum reviewsbibio
8.0