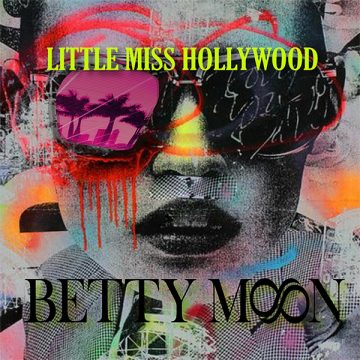 Since moving to Southern California from Toronto in 2010, Betty Moon has carved out a musical career that would be the envy of most Canadian singer/songwriters (male or female), and she’s had a number of successful and critically acclaimed international album releases along the way since then. These include 2010’s Rollin’ Revolution, 2014’s Amourphous, 2015’s Pantomania, 2017’s Chrome, and 2019’s Hellucination, all released on her own label, Evolver Music. Apart from constantly writing and recording new material, Moon has paid her dues by playing live shows at many well known L.A. music spots such as The Whiskey A Go Go and The Viper Room,and her songs have been used in a number of highly rated U.S. television series, including The Walking Dead, Dexter, and Californication.

Little Miss Hollywood starts off with the upbeat dance-infused title track, and Moon’s sassy vocal refrain “I’ll make you crazy,” sounds like a call to arms for anyone wanting to take this infectious musical ride with her.

Did It For Nothing.” clearly expresses the universally felt feeling of futility when a relationship turns sour. The sentiment is clear, as Moon states without apology,  “Let’s put it to bed”.

“Your Dirty Love” and “How Do You like It” are reminiscent of Moon’s early Rock roots, while “Don’t Stop Now (Dead Out  Of  Love)”, the first singe, is an alternative/rock tour de force.

“Monster’s In My Head” would possibly make a worthy future single, and the images that are suggested in Moon’s vocals would no doubt conjure up an  amazing music video, if she ever decided to go that route. The mid-tempo ballad “The Liar” expresses the tense, self-preservation mode one reverts to when a relationship turns sour.

Which brings me now to the most important song of the album in my opinion, “All  He Is,” Moon’s rapid Gattling gun vocal approach on this particular track is exceptional, and it may be one of her best vocal performances on record ever. She’s  never sounded better.

The final two tracks on the album, the fragile “Find A Love”and the freewheeling “Take Me Downtown”, round out Little Miss Hollywood, an album where new musical paths are explored, while still delivering one of Betty Moon’s best albums to date.

Gerry Young is President of Current Records and Management, and author of the 2011 biography Pop Goes The Weasel: Rock And Roll Off The Record, available at Indigo/Chapters, Barnes & Noble, and Amazon.com. He has recorded and managed Juno Award winning bands Martha And The Muffins and The Parachute Club among others.
RELATED ARTICLES
album reviewalbum reviewsbetty moon
7.0