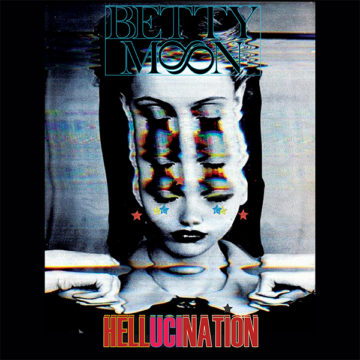 Since 1991, when Betty Moon made her debut with her self-titled album, she has been in control of her career and art. Her latest album, Hellucination, is her ninth studio album, and her first since 2017’s critical and commercially successful Chrome. Moon has also made it a habit over the yearsof not repeating herself. Sure she has a distinct style, but each album is its own identity. Hellucination is no exception and continues to show her growth as an artist. It is a concept album of sorts,  and it may be one of the most danceable concept albums in my recent memory.

Hellucination tackles urban issues, and the internal struggles and fears.  “Get Your Gun”, leads into “Violent City”, which bleeds into “Fear Takes Control”, one of the many highlights of the album. These three songs are just a sample of the way Moon is able to express the impact of a population growing more uneasy in ‘the city’.  Moon is aware of the war going on externally and internally. Realizing that, perhaps the person relationships and love is the saving grace of life. This is brilliant writing.

It is not easy to pigeonhole Moon’s music. To say it is EDM undersells it, but there are aspects of that on this album. There is also straight ahead rock (the brilliant “Get Your Gun”) and pop (“Runaway”). But all the genres fit well together and in the end you have a very coherent album. The other constant throughout the album is Moon’s distinct and strong vocals, as well as some very clever lyrics set to strong melodies.

Moon continues to grow as an artist. She is not one to redo anything, and challenges herself. With Hellucination she has done just that. She has put together a fascinating album, full of glorious sounds and her remarkable vocals. Hellucination may not be as instantly accessible as her last album, but therein lies the fun. While there are obvious hit singles (“Save My Soul”, which comes with a fantastic video), “Without You” and “Crazy (What You Make Me)”, it is a tricky album that slowly seeps its way into the listener’s consciousness.

Moon has come up with a winner. Hellucination  is a complex album that draws the listener in and keeps their attention. I am sure there will be numerous remixes in the months to come, but for me, the songs belong on this album and should be listened to as part of the whole.

Born and raised in Whitby, Aaron discovered music through his love of The Beatles. This led to a career in radio, writing for various publications, and ultimately a radio show about The Beatles (Beatles Universe), which ran for over four years. When not immersed in music, Aaron enjoys spending time with the loves of his life -- his wife Andrea, and daughters Emily and Linda (all of whom have an intense love of music too).
RELATED ARTICLES
album reviewalbum reviewsbetty moon
10