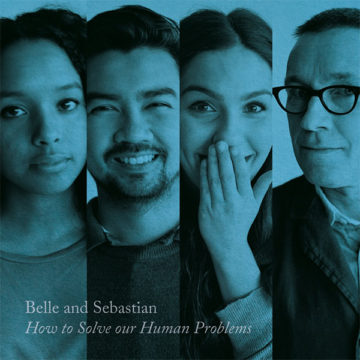 “Poor boy, I could never live up to your imagination,” sings violinist Sarah Martin in the opening song “Poor Boy.” And she is right. The conversation begins. The entire EP is yet another variation of a conversation between man and woman. And, as with the first two parts of How To Solve Our Human Problems, this is a brilliant work. Perhaps this is the strongest of the three.

Belle and Sebastian began the How To Solve Our Human Problems EP series in December, when Part 1 was released. Part 2 came in January, and now the 15-song set is complete with Part 3. Martin has much more of a presence on this one and it all works. She has a great voice, and when she duets with Stuart Murdoch (keyboards, guitar, vocals and principle writer), it is pure magic.

However, the songs can be uncomfortable too. “Too Many Tears,” which is one of the poppiest songs Belle and Sebastian has produced (great horn section in this one), is an argument between a couple. Imagine being at a party and the couple you are sitting with begin discussing their life. “Can you believe it all went wrong?” asks Murdoch. This is a man looking back on his life and his relationship. “You took the love and let it die,” he accuses, but he knows it is not true. Simply put, this is a work of art; the song and the whole EP. Also, there is a great Beatles reference in the song.

This is music created by middle-aged people for all people. Sure, some of us who grew up with the band may relate differently, but this is for everyone. A very human EP. However, Belle and Sebastian do not hide the fact that they have aged. They are not kids anymore, and they can be reflective in their writing. I admire bands who allow themselves to age and accept their age. In this sense, a shockingly personal and honest album. Not unlike John Lennon and Yoko Ono’s Double Fantasy.

Murdoch and company are simply trying to understand the human condition, simple as that. But relationships are complicated. And they do not have the answers or the magic words. They are telling five (15 over the three EPs) stories.

Musically, I don’t know if they have ever been this accessible. The songs grab you, draw you in, and stay in your consciousness (and subconsciousness as well). And like good food, you just want to start the whole set over again once it is over.

This EP set is one of the most original projects released in a long while. The manner in which it is presented and the music/lyrics are very original, and the music is political in its own way. It is also a work of art.

Born and raised in Whitby, Aaron discovered music through his love of The Beatles. This led to a career in radio, writing for various publications, and ultimately a radio show about The Beatles (Beatles Universe), which ran for over four years. When not immersed in music, Aaron enjoys spending time with the loves of his life -- his wife Andrea, and daughters Emily and Linda (all of whom have an intense love of music too).
RELATED ARTICLES
album reviewsbelle and sebastianhow to solve our human problems – part 2
7.0