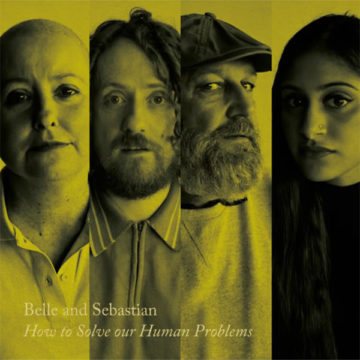 One of the things I love about Belle and Sebastian is that one never knows what the band is going to do next, both musically and in terms of releases. On December 8, 2017, the band released the first of a three-EP set titled How To Solve Our Human Problems (Part 1). January brings the release of part two, and part three is scheduled for February, 2018. Belle and Sebastian is no stranger to the EP format (though, as an older guy, my memory of EPs were as four-track, seven-inch singles). This is a five-track EP, and by the time all three are issued there will be 15 new tracks, which really adds up to one album.

But each EP has its own feeling and vibe, both musically and lyrically. This EP starts off with “Show Me the Sun,” with a very singalong “na na na na na,” which then shifts to a rather searing guitar to the opening lyric, “What do you, Want of me?” Stuart Murdoch (who is the primary writer for the band and also one of their vocalists) is talking to another person and his audience. Interesting way to begin a new release.

But, as with part one, How To Solve Our Human Problems (Part 2) is really a conversation between a couple. So, yes, while he may be singing to his audience (which is another type of relationship), he is singing to his girlfriend/wife. Thus begins the conversation.

Sarah Martin answers him in “The Same Star,” perhaps the highlight of this excellent set. At times one feels as though one is eavesdropping on a conversation, which is a compliment to not only the writing but the manner in which the songs are recorded. Intimate, feeling, and full of emotion. This is also due to their choice of producer for this project, Leo Abrahams (Wild Beasts, Regina Spektor). It seems this was a perfect teaming.

Belle and Sebastian’s last studio album was released in 2015 (Girls In Peacetime Want To Dance), and then the band embarked on a world tour. That time seems to have allowed the band to assemble something unique, and to develop a brilliant way in which to present their new 15 songs. There was no indication the band was going to go in this direction. It is a bold move and one that is paying off.

I like the three-EP; it is kind of like an old-time film serial or a book serialized in a newspaper, though neither format exists anymore. But here the EP set works and works extremely well. Part one was brilliant, as is part two. I look forward to part three of How To Solve Our Human Problems.

Born and raised in Whitby, Aaron discovered music through his love of The Beatles. This led to a career in radio, writing for various publications, and ultimately a radio show about The Beatles (Beatles Universe), which ran for over four years. When not immersed in music, Aaron enjoys spending time with the loves of his life -- his wife Andrea, and daughters Emily and Linda (all of whom have an intense love of music too).
RELATED ARTICLES
album reviewsbelle and sebastianhow to solve our human problems – part 2
9.0