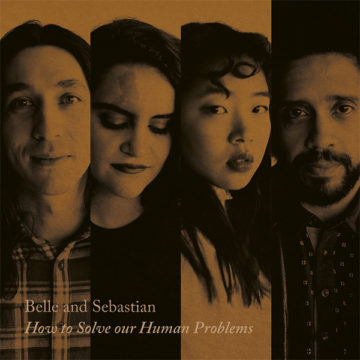 A 1970s back beat isn’t all the latest album from Belle and Sebastian has to offer. The six-piece band from Scotland is currently in the works of putting out three E.P.s, which together make up How to Solve Our Human Problems. The first instalment, out December 8th, offers a fantastic continuation on the pop side of Belle and Sebastian’s work with soulful twists and funky bass lines. Only five songs long, Part 1 truly packs the punch.

Following that, “We Were Beautiful” features spoken word on top of a much more dissonant and woeful sound.  Cymbal-heavy percussion and synth move the overall feel of the album up a decade to a dark-pop 1980s sound.  A highlight of the five tracks, “We Were Beautiful” truly evokes where Belle and Sebastian’s career is going.

“Fickle Season” is the first track on How to Solve Our Human Problems, prominently featuring the enchanting vocals of Sarah Martin.  Similar to the dissident sound of “We Were Beautiful”, “Fickle Season” has a bit more of a jazz influence with graceful bursts of tambourine peppered through out. Evoking the feeling of wanting to cozy up by the fire with a glass of wine in hand, “Fickle Season” continues the light but slightly sad feeling of the E.P.

Changing pace, “The Girl Doesn’t Get It”, is a faster-paced song with shared vocals through out the chorus. The verses feature Stuart Murdoch’s soothing voice followed by a bridge with Sarah Martin, which mixes in vibes reminiscent of Freeze Pop. Painted on a backdrop of videogame-like synth, this song works as an effective pick me up, with upbeat sounds and encouraging lyrics like, “You should dance ‘til your heart is joyful”.

Closing the album, “Everything is Now” is almost entirely instrumental with the exception of the chanting of “Everything is now / Everything is different now” which comes in as an introduction and closing to the track.  In between these sets of vocals, organ, guitar and flute are all featured in rhythmic, syncopated melodies. Starting a bit groovy with the organ, the song effortlessly moves into a slightly uplifting feeling with the flute and glossy guitar.  However, when the vocals re-enter at the end of the song, the prominent feeling of gloom that has laced itself through out the entire EP returns. A promising, raw and emotional start to what will eventually be a trilogy, part 1 of How to Solve Our Human Problems is a promising look at what is to come.

Gabrielle Mueller is a lover of all things music, writing and charcuterie boards. Gabrielle has a particular passion for music of the 1960s and the hippie movement in Toronto’s Yorkville district. Gabrielle runs her own music website, The Hippie Historian, where she reviews concerts, interviews musicians and writes about music history that spans the ages.
RELATED ARTICLES
album reviewsbelle and sebastianmatador records
7.0