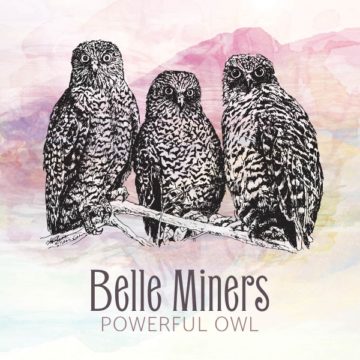 Powerful Owl is the debut album from the Australia-based Belle Miners, a band comprised of two Canadians (Felicia Harding and Martina Avros) and one Australian (Jamie Jackett). Since starting out three years ago, they have been touring Australia while writing music and developing their sound. However, to record Powerful Owl, they made their way to British Columbia where they collaborated with producer Joby Baker (Mae Moore, Andy Maize, Cowboy Junkies).

The good news about the album is that these three are remarkably talented and know how to write, sing and play. Their harmonies are flawless and their blend of voices is absolutely brilliant. This is a band that has been spending their time working on their craft.  Not to mention the fact that they write some terrific songs. The real problem is that they have not found their voice and sound.

The songs are fine, for the most part, but they do not sound entirely genuine or unique. This is a band that is influenced by others and the influences come through in their songs. Baker has done a fine job producing Powerful Owls, but there seems to be something lacking on the album. Perhaps the issue is that, as good as the songs are, musically they do not offer anything different or new.

There are plenty of great songs, with the first single “Fall In Love With Me” being a prime example, but the album feels like a collection of singles or songs rather than an album. There is not a real coherent flow throughout and really you could drop the needle anywhere and be satisfied.

This is a new folk-pop sound and the album does indicate that this band has a great deal of potential and there are great things ahead for this band. They simply have to find their own voice and their own distinct style.

Born and raised in Whitby, Aaron discovered music through his love of The Beatles. This led to a career in radio, writing for various publications, and ultimately a radio show about The Beatles (Beatles Universe), which ran for over four years. When not immersed in music, Aaron enjoys spending time with the loves of his life -- his wife Andrea, and daughters Emily and Linda (all of whom have an intense love of music too).
RELATED ARTICLES
album reviewsmgm
9.0