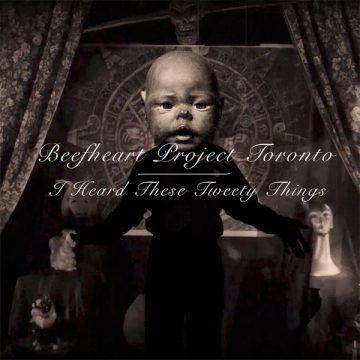 This is a somewhat difficult album to review and assess as tribute albums are always tricky to examine. What is the purpose of the tribute, and how are the songs treated, performed and presented?  I Heard These Tweety Things by Beefheart Project Toronto is actually a very unique tribute to a talented and often overlooked artist, Captain Beefheart and The Magic band.

Beefheart Project Toronto is an ambitious group of Toronto musicians, who  in their own words, set out  “ to map out some of the Magic Band’s most complex tracks to make their own recordings of them”, as well as their commonly overlooked simpler tunes. Since beginning this project in 2014, they have  recorded 21 tracks, which is basically one song from each of Beefheart’s albums, plus assorted singles. The project was started by Tony Malone (Drastic Measures, Basketcase) who also acts as recording director.

For those familiar with Captain Beefheart’s music, you  know that he wrote and recorded very complex music, both with and without his band. His songs were full of odd time signatures and sometimes very unmelodic melodies. The lyrics added a whole other level. The songs are wonderful but not instantly accessible. To cover them is no easy feat, but Beefheart Project Toronto have done so admirably. There is an excellent documentary explaining some of the process to the recordings on YouTube (Beefheart Project Toronto). Suffice to say, these recordings were not easy.

Malone and his band are not reinterpreting the songs, but rather covering the songs as close to the original, which is a very ambitious project to say the least. Beefheart Project Toronto brings out the excitement and energy of the originals. Malone’s vocals are spot on, and perfect for the music.

Interestingly the songs are not arranged in chronological order, but rather sequenced where each song sets up the next. When one listens from beginning to end, it creates a rather fascinating listening experience. They even put “Hair Pie Bake Part 2” before “Hair Pie Bake 1” and it works.

Don Van Vliet (aka Captain Beefheart) would have been 79  this year.  I have no doubt he would not only approve of , but applaud the project.  I Heard These Tweety Things is a unique and original tribute.

Born and raised in Whitby, Aaron discovered music through his love of The Beatles. This led to a career in radio, writing for various publications, and ultimately a radio show about The Beatles (Beatles Universe), which ran for over four years. When not immersed in music, Aaron enjoys spending time with the loves of his life -- his wife Andrea, and daughters Emily and Linda (all of whom have an intense love of music too).
RELATED ARTICLES
album reviewalbum reviewsfrank zappa
9.0