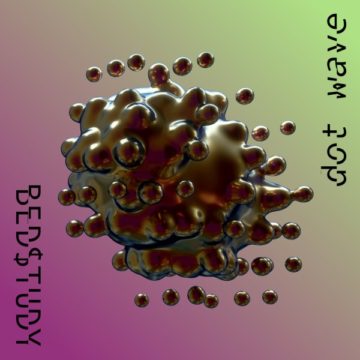 Dot Wave EP is the first project from Brooklyn trio, Bedstudy, who are looking to make modern electro-R&B with an indie-pop flare. The group has previously made some waves with the music video for ‘Ø (Arms Away)’, which tackles violence against trans people.

Dot Wave EP is a memorable entry of modern R&B, imbued with sounds of The Weeknd, Frank Ocean, and some nostalgic New Jack swing thrown in.

“Page^”, the album opener, is about a relationship that has become stagnant and the frustration that comes from it.

The best track is “S_M00n” or “Super Moon”, as Baldwin croons about the thrill of chasing after a romantic conquest. The harmonizing is reminiscent of New Jack swing with modern production techniques like digital reverb accentuating a new-school feel.

The EP is promising as Bedstudy blends different elements really well, resulting in sleek-sounding R&B, but there’s nothing terribly original about their sound. “D3n1m Is the Vibe” sounds like a Channel Orange throw-away. Everything from the song’s subject matter to its rhythmic structure to the timbre of Baldwin’s voice sounds like a Frank Ocean imitation.

Overall it’s a solid effort but lacks in originality.

Brian Capitao is a freelance writer and editor of https://deepfreezechillin.com. He has a passion for hip hop and hosts a podcast in Toronto called The Freeze, your weekly dose of hip hop chatter.
RELATED ARTICLES
12album reviewalbum reviews
8.0

by Gerry Young on April 6, 2018
Sloan 12 Murder Records/Universal Music Sloan is one of those Canadian bands I’ve always liked, so I was looking forward to hearing their 12th album, fittingly titled 12, and featuring 12 new songs [...]
6.0