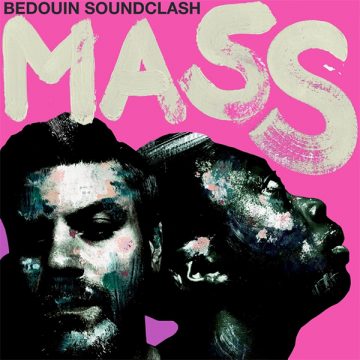 Jay Malinowski and Eon Sinclair are back with the first Bedouin Soundclash album since 2010’s Light The Horizon. I’m not going to say it was worth the wait – a decade is a long time,after all – but this is certainly a fine album with most of the group’s unique qualities strongly in evidence.

The initiative for this release came from ‘Clock Work’, which Eon wrote during the layoff, supplying a sample from an old big swing band and adding break beats . He then decided “This is a Bedouin song!”. Yes, the band has kept its flair for the inventive – the opening “
“Salt Water” has been described as “post-punk soca”, but that’s not even half of the story for this track, incorporating blasting horns, Mike Dillon’s balafon-like marimba playing, the warm, engaging vocals and dub effects. Talk of horns means that I should mention some of this album was recorded in New Orleans with The Preservation Hall Jazz Band adding distinctive Crescent City vibes, along with strings courtesy of Rick Nelson of Afghan Whigs, Bad Brains’ Chuck Treece on drums, The Asylum Chorus Choir and Vancouver’s St James Music Academy Children’s Choir.

Elsewhere you’ll find echoes of South African music, electronica, gospel, David Bowie and Sam Cooke, among other things. “Edges Of The Night” is an almighty groove recorded at Preservation Hall in New Orleans, showing that the Soundclash can recreate their dense, complex and catchy sound live, and then proceedings close out with the thoughtful R’n’B/ reggae mashup  “Just Like You”, featuring Cree Summer.

Almost a ten year wait? Maybe it was worth it after all.

The Spill Magazine is a Toronto-based online publication dedicated to covering the independent music scene with a strong focus on our thriving hometown talent. Our writers bring you up-to-date news, in-depth features on musicians and reviews for the latest CD releases. We also travel to the front lines for all local festivals including Canadian Music Week and North by Northeast. Don’t forget to check out our Facebook and Twitter pages for all daily Spill updates.
RELATED ARTICLES
album reviewalbum reviewsbedouin soundclash
7.0