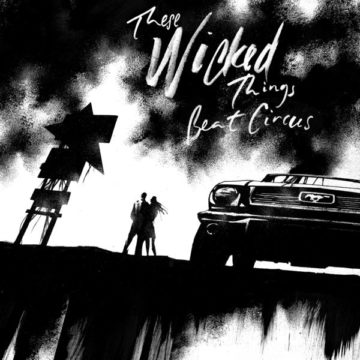 Ten years following the release of Boy From Black Mountain, Beat Circus has re-emerged from the depths of a hiatus to bring the third and final instalment of the so-called ‘Weird American Gothic’ trilogy to light. Tied together through a common aesthetic, narrative, and atmospheric exploration of American culture and folklore, 2019’s These Wicked Things is far from the long-awaited finale to a compelling storyline.

What the album is, however, is the bookend to a montage of sorts, shining light on traditions and vibes which round out a more holistic image of the American spirit exposed throughout the trilogy. Delving deep into influences ranging from Italian filmmakers like Dario Argento to southern/Mexican desert music and, unsurprisingly, American folk music (among many others), the album pulls together a shadowy and introspective undercurrent of the country’s cultural traditions.

With a typically layered and broadly instrumented sound, Brian Carpenter, the composer and multi-instrumentalist bandleader of Beat Circus, has once again managed to reinvent the sound of his act without losing the atmospheric continuity of the album sequence. With a mixture of instrumentals and narrative songs, inspired by his soundtrack for the 2014 play ‘The Barbary Coast’, the LP is a well-orchestrated exploration of a deep and immersive headspace that fluctuates between extremes without pushing too far in any particular direction.

Given the ambitious musical scope of the project, the continuity and progression is less fluid at some times than others, infrequently coming across as heavy-handed. However, these moments are generally exceptional in a record that does well to tie together often disparate atmospheres. From the garage-y, upbeat ‘Just Lost A Dream’ to the unfocused collapses into instrumental texture on “Childe Roland To The Dark Tower” and the epic driving force of the titular song, the album twists and turns wildly which each successive track without (completely) losing control.

Impressively put together as a holistic work, with lots of production-based ear candy to be enjoyed, Beat Circus’ latest effort successfully overcomes the challenges and flaws inherent to a work of such ambition. It seems natural, then, that the most room for improvement lies in the ability to move gracefully and effortlessly across the broad range of highs and lows found on the record, though it must be emphasised that Carpenter is already fairly successful in this regard. A thoroughly enjoyable and rich album, it probably won’t get as much attention as it deserves.

Based in Montreal but raised across Western Europe, Andrew feels at home both everywhere and nowhere. Having picked up the piano at age four, he has since gone on to add clarinet, saxophone and guitar to his musical arsenal. As well as crafting music, Andrew spends a lot of time listening both at home and in live contexts. Rather than focusing on a particular style or calibre of artist, he is keen to explore music of any shape or size. Outside music, Andrew's passions lie in philosophical writing, visual art and sharing positivity with the world around him.
RELATED ARTICLES
album reviewalbum reviewsbeat circus
9.0