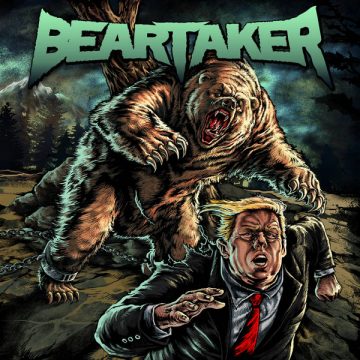 Without warning, Beartaker formed and dropped their debut EP, Total Disgrace. The four-song release comes from Monster Truck’s Jeremy Widerman and Bad Ideas’ Theodore Mckibbon, a pair of friends who recently reconnected and wanted to collaborate for collaboration’s sake. The result is a raw, hard-hitting, and explosive release that should absolutely be on everyone’s radar.

Opening with the surprisingly thrash-heavy title track, Total Disgrace wastes no time kicking into high gear. Heavier than expected, “Total Disgrace” is reminiscent of ‘80s thrash metal in the tone of early Metallica. The rhythmic, blistering track is driven by Widerman’s punk vocals, crunching riffs, and Mckibbon’s relentless drums, and the trashiest of hi-hats (seriously, what are those?). The aggressive opening track sets the tone for the EP and leads perfectly into the slow, ominous, and sludgy “Their Touch”. The riff is beyond killer, perhaps the best on the record, yet that feels like a tough statement to stand behind when all the riffs are just that good, and the song is monstrously heavy without sacrificing a modern hard rock feel. Beartaker does a fantastic job of teetering on a line between heavy rock and metal making their debut something fans on both sides should thoroughly enjoy.

“The Broken” follows as another heavy-hitter, however this one tends to lend more to rock of the 2000s with its first pumping “Heys’” chanted throughout and a melodic chorus that contrasts nicely with the rest of the record. Just as fast as it began, Total Disgrace comes to a close with “Get Out”, another unrelenting track that could ignite a mosh pit literally anywhere. This song absolutely rips hard and is another favourite, alongside “Their Touch” that makes Total Disgrace a cut above most independent rock releases.

Beartaker’s Total Disgrace initially had me with their album art depicting a grizzly bear on the brink of mauling none other than Donald Trump, likely to death. I was further intrigued after reading about Widerman’s involvement, and within seconds of the opening track, I was hooked. This EP, which clocks in at under 15 minutes, has been on repeat all day as it continues to be just as exciting to hear as it was on my first playthrough. There is a strong underlying punk energy that fuels the metal driven sound of the band. This is a grimy and rough EP that will leave you needing more and celebrating Beartaker.

A passion for music has always been a part of Gerrod’s life. As a young boy, he was raised on a steady diet of the music from The Chili Peppers, Aerosmith, The Stones, Prince, and others from his mum. Raised in the GTA, Gerrod continued to foster his love for music by attending a wide range of concerts and learning the drums. His unapologetic passion for music has no bounds and has spread to a wide variety of styles, whether it be the 90’s rock that sound tracked his teenage years, the jazz he studied in university, or his newfound love for hip-hop. He recently received his bachelors in music and education from York University and is passionate about writing and reviewing good (and less than good) music. Gerrod is also the drummer and songwriter for a Toronto based rock & roll band, One In The Chamber.
RELATED ARTICLES
album reviewalbum reviewsjeremy widerman
6.0