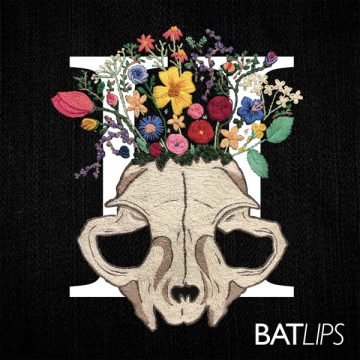 Emerging from a genre where you’d be hard pressed to see evolution and growth, Bat Lips take it upon themselves to change things up. Where Bat Lips I was a statement that put the band well onto the map, Bat Lips II is a testament to the band’s ability to stay fresh and innovative.

The EP begins with the groovy, surf rock-esque “Black Dice”: a fun track which subdues the aggression and rage one may have come to expect from the three piece act. However, there is no lack of riffs and energy to make up for this initial estrangement. A rather catchy number, “Black Dice” serves as an indication of the change of tone and sound as compared to their debut EP.

“Modern Pearls” slows things down with a chugging instrumental not unlike doom metal. The guitar work has a more melodic quality to it, as Mygatt croons to the bass-heavy, kick dominated beat. The lazy drawl of a vocal line makes this song a suitable interval for a three-track EP, but keeps “Modern Pearls” far from being a highlight on this release.

In a similar manner to their previous EP, the last track is by far the single-most fascinating out of the three, the one that really sets the band apart. “Bat Cathedral” is a deliciously riffy build-up with a fitting proclamation: “When we rule the world/We’ll leave nothing.”

The riffs and heavy double bass work tie together three tracks on an otherwise diverse lineup. While perhaps not nearly as powerful or in-your-face as the first EP, Bat Lips II is a more subtle yet equally impactful nod to the trio’s capability and versatility. I had the pleasure of calling it once, and I’ll say it again; Bat Lips are the band to look out for in the current scene.

Stan is a metalhead, musician, and freelance writer (for hire!) In that order. Yes, looks are deceiving. No, metal is not (all) about Satan.
RELATED ARTICLES
album reviewalbum reviewsbat lips
8.0