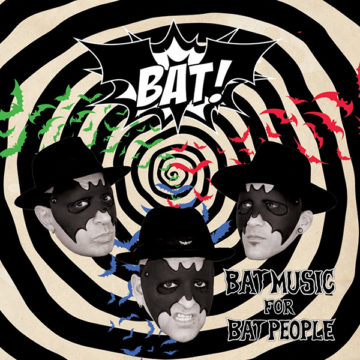 BAT! explain their signature “batrock” as a variety of rockabilly, punk, horrorpunk, surf, and rock ‘n’ roll, which is well represented on their 20-song debut album Bat Music for Bat People.

Right off the bat (sorry couldn’t resist) “We Fight!” is a fast and furious track that helps set the tone for the album. “Villain” is a great rock tune and is the catchiest song on the album.

The trio, known as Green Bat, Blue Bat, and Red Bat, are self-described as a vigilante psycho supergroup. donning bat shaped masks and fedoras. Their logo and related artwork is reminiscent of the 1960s live action Batman TV show.

So when I heard “Revenge of The Batmask”, I envisioned the band performing in an old tavern where a fight breaks out between Batman and numerous henchmen, complete with ‘zap’ and ‘pow’ graphics. Fun!

Tracks such as “Graveyard Girl”, “Cemetery Man”, and “She Wolf” bring that horror punk vibe, while “Getaway Car” brings the rock ‘n’ roll.

The album also includes five covers, Danzig (“Mother”)”, the king of surf Dick Dale (“Misirlou”), The Damned (“Love Song”), Gloria Jones (“Tainted Love”), Portugal. The Man (“Feel It Still”), and Panic! At The Disco (“Say Amen”) (Saturday Night). “Feel It” Still and “Say Amen” (Saturday Night) feel a little out of place on this album, but with 20 tracks, you’re bound to have an enjoyable experience.

Trista’s a music addict who’s taste in music spans over numerous genres. She enjoys playing her bass guitar, but honestly she’s not very good at it. So she goes to concerts and watches real musicians who are far more talented than her. You’ll find her there in the front row, because, well, she’s short and wouldn’t be able to see the stage very well otherwise, and because she strives to get the perfect photo to capture the experience.
RELATED ARTICLES
album reviewalbum reviewscleopatra records
9.0