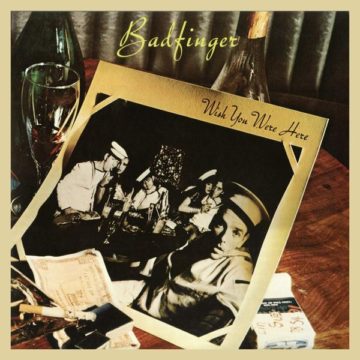 Wish You Were Here was Badfinger’s second and last album for Warner Brothers, and as with their album, Badfinger, was originally released in 1974. This was to have been their breakthrough album. The reviews were great, and it had entered the charts with a bullet but  then it was pulled due to contract disputes with Warner Brothers, mismanagement of money by their manager, and other legal issues. The album disappeared off the shelves, their tour was cancelled, and an album that was to have been a classic was somewhat forgotten.

Chris Thomas was once again at the producers helm (as he was with their two previous albums Badfinger and Ass), and with this album he produced a rock masterpiece. It is interesting that in two short years he would be producing The Sex Pistols.

For this rerelease, Real Gone Music have added a previously unreleased song (“Queen Of Darkness”) and a number of outtakes and works in progress. But it is the original album that still holds up and is the main reason to purchase this new version of the album. Here Badfinger were firing on all cylinders. At this time, Badfinger were Mike Gibbins (drums), Joey Molland (guitar), Tom Evans (bass), and Pete Ham (lead guitar).

There is not a weak song on the album, and it features two incredible medleys: “Meanwhile Back At The Ranch/Should I Smoke” and the brilliant “In The Meantime/Some Other Time”. These are cornerstones of this classic album. But really, all the songs are melodic, well produced, and show their excellent musicianship. The album is a rock album in the classic sense of the word, and is instantly accessible.

Wish You Were Here was the last album featuring the four members. They recorded a follow-up, Head First, which Warner Brothers refused to release at the time (it was released in 2000), and sadly in 1975, Pete Ham took his own life. Tom Evans would do the same in 1983. The story of Badfinger fills books, and is a tragic story. But when one focuses on the music, one is rewarded by a tight rock band.  Wish You Were Here serves as reminder to just how brilliant this band was and that they should have been contenders.

Born and raised in Whitby, Aaron discovered music through his love of The Beatles. This led to a career in radio, writing for various publications, and ultimately a radio show about The Beatles (Beatles Universe), which ran for over four years. When not immersed in music, Aaron enjoys spending time with the loves of his life -- his wife Andrea, and daughters Emily and Linda (all of whom have an intense love of music too).
RELATED ARTICLES
album reviewalbum reviewsbadfinger
10