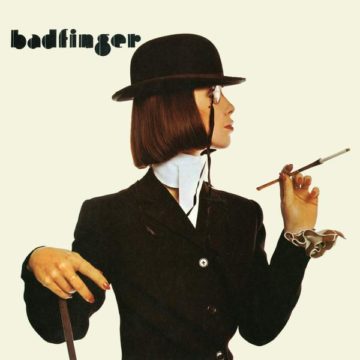 Badfinger signed to The Beatles’ Apple label in 1968, when they were known as The Iveys. After their first album, they changed their name, Joey Molland joined the band (replacing the departing Ron Griffiths) and had a worldwide hit in 1969 with Paul McCartney’s “Come And Get It”. They released four albums on Apple, and in 1973 signed to Warner Brothers. In 1974, they released two albums. Badfinger was their first album for that label.

The album was to be called For Love Or Money, but that title was not added to the sleeve. Badfinger is an excellent album, and was horribly overlooked. It has been out of print for a number of years, but the good folks at Real Gone Music have brought it back, and with  bonus material featuring an unreleased song and outtakes.

The problem with this reissue is the bonus material. It is interesting for die-hard fans. The unreleased song “Love My Lady” is brilliant but the ‘works in progress’ do not add much to the overall package. The remastered sound is astounding and the album sounds crisp and modern. This is classic mid-1970s rock and should have been huge.

It is nice to have Badfinger back, and perhaps it is time for the world to discover an album that did not get the attention it deserved when originally released.

Born and raised in Whitby, Aaron discovered music through his love of The Beatles. This led to a career in radio, writing for various publications, and ultimately a radio show about The Beatles (Beatles Universe), which ran for over four years. When not immersed in music, Aaron enjoys spending time with the loves of his life -- his wife Andrea, and daughters Emily and Linda (all of whom have an intense love of music too).
RELATED ARTICLES
album reviewalbum reviewsbadfinger
7.0