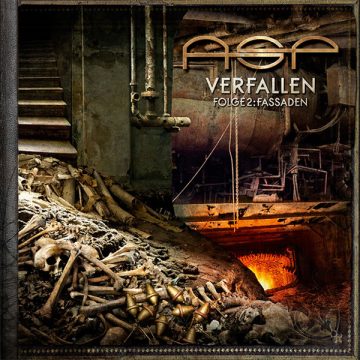 Verfallen Folge 2: Fassaden wraps up the haunting epic that is Verfallen. Although it’s sung in German, audiences can still hear the emotion through the eerie violin and the strong voice of frontman Alexander Spreng.

ASP was formed by Spreng and guitarist Matze (Matthias Ambré) in 1999 and released a few tracks. They didn’t expand their band until 2000 when bassist Tossi (Andreas Gross), drummer Himmi (Oliver Himmighoffen), and backup vocalists Max (Marcus Testory) and Holger Hartgen joined. Since then they’ve had members come and go, including co-founder Matze in 2011.

The interesting part about this album is that it’s based off a novel by award-winning author Kai Meyer. Meyer wrote Das Fleisch der Vielen (or, The Flesh of the Many in English) specifically for ASP with this type of project in mind.

The novel takes place in the Hotel Astoria in Leipzig and features Paul and Astoria. While the first edition of the tale focused on the events that happened in the hotel, the second further explores the horrific happenings with more detail.

Right from the first melancholic chords of the first song, it’s clear that there was a lot of time and effort put into Verfallen – Folge 2: Fassaden. Despite the fact that languages can’t properly be directly translated, after looking up the lyrics in English the songs still read somewhat poetically which leaves non-German speakers wishing they could experience the story as it was meant to be.

Another great factor is that there are a mix of high-energy songs, power ballads, and somber melodies. The variety not only adds to the emotion of the meaning, but it also helps to keep the audience’s attention.

Some songs that really stick out include the opening “Fortsetzung folgt … 2 (Vorspann),” “Das Kollektiv,” and “Ich Lösche Dein Licht.” “Fortsetzung folgt… 2 (Vorspann)” starts off with some simple notes, but once the violin solo drops it really draws interest. “Das Kollektiv” is a dark tune with a synth background and an almost-Viking march-sounding chorus. “Ich Lösche Dein Licht” is a little more fast-paced with some eerie piano chords and is incredibly catchy.

Anyone who enjoys a Rock album with emotion and a variety of different types of songs should definitely take some time to have a listen – if they’re okay with listening to German, of course.

Music and writing have always been a big part of Sabrina's life. She would "borrow" her dad's rock and metal CDs from his collection and listen to them while going through the art books. Although she doesn't write angsty poetry anymore, she does have a Bachelor's Degree in Journalism which she uses to pursue a creative career path. When she's not writing, Sabrina can be found juggling a coffee cup and DSLR or Instagramming her food.
RELATED ARTICLES
trisol music group
7.0

by Carlos Cajina on January 26, 2018
We Are Temporary Embers Trisol Music Group Brooklyn-based producer Mark Roberts returns with a record that captures a wide spectrum of human emotions under the veil of tightly-constructed [...]
7.0

by Sabrina Biot on August 16, 2016
Rome The Hyperion Machine Trisol Music Group Every once in a while, when listening to a new album, within the first few minutes of listening the first thing that comes to mind is how good the [...]
6.0