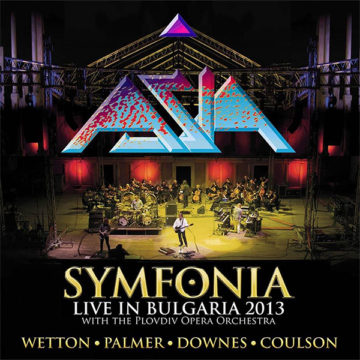 Asia formed in 1981 and was the supergroup for prog rock.  But this was ‘pop’ prog rock,  short(ish) songs full of hooks, strong melodies, harmonies and the occasional solos.  Well crafted music played by A-list of musicians.  John Wetton (U.K., King Crimson, Roxy Music), Geoff Downes (The Buggles; Yes), Steve Howe (Yes), Carl Palmer (Emerson, Lake and Palmer) came together and produced a very fine studio album that sold by the truckloads.  After the release, and relative failure, of their second album, Alpha, Wetton left the band, and from then on, Asia remained a band in name, a band that has had numerous member changes.  Wetton himself returned to the fray returned in 1984 and as mentioned, the band soldier on with successful tours and mediocre albums that did not receive much attention.

This album, recorded in Bulgaria in 2013 and filmed for Bulgarian television is a new live album for this band.  This set includes a Blu Ray of the broadcast.  Three quarters of the original band are present for this show (Steve Howe is missing, and is replace by Sam Coulson on guitars).

The playing is note perfect and Wetton turns in credible vocals. Actually, Wetton sounds like he is having the time of his life.   But the issue with this live album is why listen to the music live when the live album is close to the studio album?  This is the one problem with this two CD set.  Thankfully, CD two saves the day.  CD one makes me reach for the original versions.  CD two, however is a different story.  Here the band is joined with The Plovdiv Philharmonic Orchestra, conducted by Levon Manukian.  The orchestra really supplements the musicians and adds a whole new level to the sound and the music.  To be honest, a live orchestra is much more enjoyable than synthetic strings, and this is a shining example.

Of course bands playing live with orchestras is nothing new (Procol Harum’s classic album Procol Harum Live: In Concert with the Edmonton Symphony Orchestra;  Alan Parson Symphonic Project, Live in Colombia are just two examples), but with Asia, it seems to bring the best out of the band and the energy level just explodes (“Don’t Cry” is an excellent example).  Making this the most enjoyable live album of the Asia catalog (and they have issued a lot of live albums).

John Wetton passed away on January 31, 2017 and although this is not the fitting epitaph of this remarkable musician, that would be anything by U.K.  Asia was a band that had many brilliant moments and some of their albums are well worth searching out.  Wetton had an astounding career and during his career, he did provide some of the finest bass playing ever put to tape.   This recording serves as a nice reminder of what Wetton did and how well he did it.

Born and raised in Whitby, Aaron discovered music through his love of The Beatles. This led to a career in radio, writing for various publications, and ultimately a radio show about The Beatles (Beatles Universe), which ran for over four years. When not immersed in music, Aaron enjoys spending time with the loves of his life -- his wife Andrea, and daughters Emily and Linda (all of whom have an intense love of music too).
RELATED ARTICLES
album reviewsasiafrontiers music srl
10