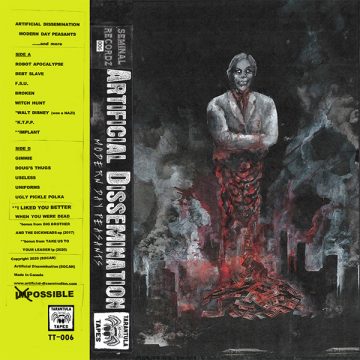 Hailing from Toronto and Hamilton, Artificial Dissemination has released their latest album, Modern Day Peasants. The album is the fifth release from the two-piece band to be released via Tarantula Tapes and includes an additional four tracks – all of which are from their 2014 album, Take Us To Your Leader and 2017’s EP, Big Brother And The Dickheads.

Modern Day Peasants opens with a wave of distorted feedback before exploding into the utter chaos of the thrashing garage rock of “Robot Apocalypse”. How Artificial Dissemination can keep this song running at full pace is beyond me, but they manage to stick the landing on the opening track. By any standards, the following track, “Debt Slave” is an unrelenting barrage of punk energy – very much in tone to that of the underground Los Angeles scene from the ‘70s – however, in comparison to “Robot Apocalypse”, “Debt Slave” is sonically refined and demonstrates a stronger sense of songwriting and structure.

Bouncing between wall of indiscernible noise rock, that serves only as a form of emotional and artistic expression, and raw and gritty punk rock of generations past, Artificial Dissemination hit and miss the mark throughout Modern Day Peasants. That being said, however, tracks like “Broken”, “Walt Disney Was A Nazi”, “Gimme”, and “(I Liked U Better When U Were) Dead” are genuine punk rock treats that shine apart from the lesser tracks on the record, and even Artificial Dissemination’s contemporaries.

Modern Day Peasants is as fun as they come, despite its technical and sonic shortfalls. Bringing an unapologetic and reckless wave of pure, unadulterated wild abandon, Artificial Dissemination have delivered a hard-hitting and rough punk rock record. This will not be an album for most people, but that’s the point. Modern Day Peasants is deliberately abrasive and is an exercise in total creative expression, whether you like it or not.

A passion for music has always been a part of Gerrod’s life. As a young boy, he was raised on a steady diet of the music from The Chili Peppers, Aerosmith, The Stones, Prince, and others from his mum. Raised in the GTA, Gerrod continued to foster his love for music by attending a wide range of concerts and learning the drums. His unapologetic passion for music has no bounds and has spread to a wide variety of styles, whether it be the 90’s rock that sound tracked his teenage years, the jazz he studied in university, or his newfound love for hip-hop. He recently received his bachelors in music and education from York University and is passionate about writing and reviewing good (and less than good) music. Gerrod is also the drummer and songwriter for a Toronto based rock & roll band, One In The Chamber.
RELATED ARTICLES
album reviewalbum reviewstarantula tapes
7.0