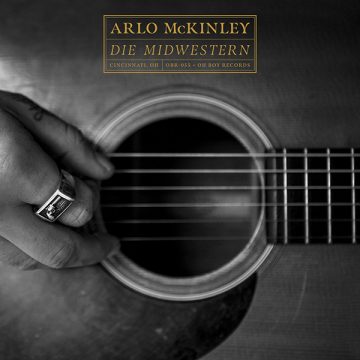 A debut album at 40? Before you rise your eyebrows or hear a single note from Arlo McKinley’s album Die Midwestern, bear one fact in mind–McKinley was the last artist signed to the late great John Prine’s Oh Boy label. If that is not enough, then the music on the album will do it for anybody who has had at least a passing interest in anything connected to roots music.

The first thing you notice is McKinley’s weather-weary voice guiding his songs through the 11 tracks here. That certainly would not be enough, but then you notice why Prine was particularly interested in Arlo’s songwriting. The title track and “Bag of Pills” would suffice to prove this point, but the rest of the album is up there, with ease.

Even then, an album can fall flat if the musicians involved don’t offer up good vocals and excellent songs. The Memphis session guys that were involved and the production of the legendary Sam Phillips studios give the album a sound reminiscent of early releases of The Band.

What we get on Die Midwestern is McKinley’s intricate mix of country, soul, and all things roots, combined with a lyrical punk attitude. No matter how quirky that might seem, the results are perfect, and just go to prove the point that it is never too late to do what you can do best.

Formerly a lot of things, including a journalist and a translator, currently a freelance writer living in The Netherlands.
RELATED ARTICLES
album reviewalbum reviewsjohn prine
7.0