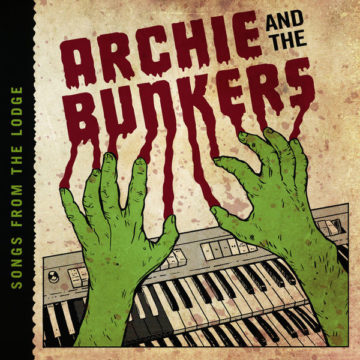 Archie And The Bunkers
Songs From The Lodge
Dirty Water Records

Hailing from Cleveland, Ohio comes the punk rock duo Archie And The Bunkers. Consisting of the O’Connor brothers: Cullen on vocals and organ, along with Emmett on drums and vocals. Songs From The Lodge is the band’s second full length release. This follows their 2015 self-titled record, along with a number of singles and two EP’s.

Songs From The Lodge kicks off with rhythmic shots of the drums and organ on “Bill’s Bad Day”; a song that soars with throat wrenching vocals that rest someplace in between expected punk vocals from the likes of The Sex Pistols and a style of slick crooning that was popular in early rock music during the 1950’s, similar to that of Elvis. Furthermore, it is apparent immediately that the use of organ makes Archie And The Bunkers stand out immensely from their peers, making them fit in with the rest of Dirty Water Records’ roster in the sense that their record is incredibly unique with a flair for vintage proto-punk. As a result, Songs From The Lodge is a highly bombastic and rhythmic record with tracks like “Lost In Today”, the erratic closer, “122 Hours Of Fear”, and “The Roaring ‘20s” that allow for the creative nature behind the duo out for a night on the town.

That being said, what makes Archie And The Bunkers stand out, also hinders the group from reaching a true sense of greatness of their sophomore full length record. While their use of organ, drums, and vocals makes for a vastly different musical experience, at times the tracks can feel empty. Without a guitar, bass, or even layered organ on top of the initial organ, some songs feel as if the band is confined in a box as they do not have another option for melodic or harmonic momentum. To use The Doors as a reference point – a band who Archie And The Bunkers closely resemble – Ray Manzarek – the group’s organist – was allowed to soar with some of the most memorable melodies ever because of guitarist Robby Krieger who rooted the band with a more rhythmic role.

Archie And The Bunkers sport an innovative sound and given some additions to the lineup and music, could very well change not only the face of punk rock, but mainstream rock as well. Their stripped back sound, along with their solid song writing, makes for a great throwback to when punk and classic rock stemmed from the same stream. While a great listen, despite its flaws, Songs From The Lodge catches a band on the verge of great things with an abundance of potential as they progress.

Here's what we think...
Spill Rating
Fan Rating
Rate Here
New Criteria
10
10
7.0
Total Spill Rating
10
Total Fan Rating
2 ratings
You have rated this
Album Reviews
album reviewsarchie and the bunkersdirty water recordssongs from the lodgeyou're my peacemaker
album reviews, archie and the bunkers, dirty water records, songs from the lodge, you're my peacemaker
About the Author
Gerrod Harris

A passion for music has always been a part of Gerrod’s life. As a young boy, he was raised on a steady diet of the music from The Chili Peppers, Aerosmith, The Stones, Prince, and others from his mum. Raised in the GTA, Gerrod continued to foster his love for music by attending a wide range of concerts and learning the drums. His unapologetic passion for music has no bounds and has spread to a wide variety of styles, whether it be the 90’s rock that sound tracked his teenage years, the jazz he studied in university, or his newfound love for hip-hop. He recently received his bachelors in music and education from York University and is passionate about writing and reviewing good (and less than good) music. Gerrod is also the drummer and songwriter for a Toronto based rock & roll band, One In The Chamber.
RELATED ARTICLES
album reviewsarchie and the bunkersdirty water records
9.0