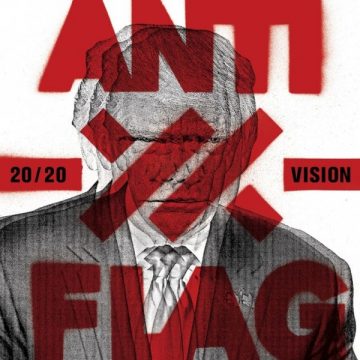 Time-honoured Pittsburgh political punks Anti-Flag have presented an eye-opener with their new record, 20/20 Vision. Their 12th studio album is of course as politically charged as one would expect after two decades of left-wing activism.

Throughout their discography, there has been a gradual shift from the crusty punk sound of 1996’s Die For Your Government. The tone here is less raw than early offerings, and a bit over-produced for a band who had established themselves as continuing the anarcho-punk vein of the ‘70s and ‘80s.

This is 2020, however, and they’ve been around long enough to know what sound sells. That’s not to say that their subject matter has strayed whatsoever; they are still raising their voices high against injustice and hate in this political climate.

The punchy bass timbre and first-rate bass lines are what stand out musically on the album. Vocals are for the most part more polished than the previously established trademark snotty vocal style. Simple song structures, ear-pleasing guitar leads, driving drum beats, and healthy amounts of “whoa-ohs” are sure to encourage old and new fans alike.

“A Nation Sleeps” stands apart from the rest of the tracks as sonically the most charged on the album. It begins with a melancholy violin melody before transforming into a punk rock ripper that borders on hardcore or crossover.

The band branches out a bit with the folky ballad “Un-American”, which has an almost indie rock sound, with acoustic guitar, piano, sliding guitar leads, and a rolling military-style snare bridge.

The album’s closer, “Resistance Frequencies”, offers a positive-sounding horn section, and the hope of a resistance, asking the question “Are you gonna head the call?”