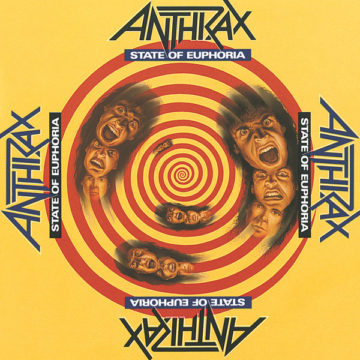 As one of biggest names in thrash metal, Anthrax has established a major fanbase over a career of 37 years. As a commemoration of their groundbreaking record State of Euphoria’s 30th anniversary, the band has released a long overdue remastered version of the album along with the original demo tapes recorded back in 1988.

The band had always felt the original release was incomplete, rushed due to a shortage of time. Listening to the rereleased album, the difference between the two is remarkable as Anthrax turns an already-legendary album into a true work of art.

The cleaner, superior production quality comes together with vigour and energy that hasn’t aged a day to renew the fresh, heavy tone of the guitars and vocals, not being muffled as they seemed on the original. Moreover, the demos of all the original tracks off the A-side often show the songs evolve right in front of the listener. This makes listening to the rerelease a phenomenal experience, seconded only by being in the studio with Anthrax itself.

Unlike most albums, none of the tracks on State of Euphoria outshine the others. Every piece is essential to the album, adding to its integrity as a whole, including the B-sides. The B-sides do sound slightly more experimental than the original tracks, exposing thrash’s punk and rock ‘n’ roll roots on tracks like Sects and Friggin’ in the Riggin’.

The album is, in simple words, an absolute delight to listen to. The legends leave no room for flaws.

Stan is a metalhead, musician, and freelance writer (for hire!) In that order. Yes, looks are deceiving. No, metal is not (all) about Satan.
RELATED ARTICLES
album reviewalbum reviewsanthrax
8.0