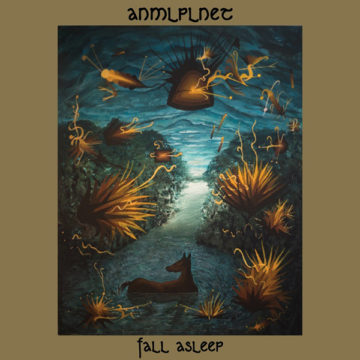 If you’ve ever wondered what it feels like to engage in coitus with a cloud, this album was made for you.  If not, there’s still some psychedelic bliss to be found.  Through six delightful and ethereal tracks me up and coming duo ANMLPLNET give ‘60s psychedelic a modern twist as the listener floats through a catalogue of twisted lyrics, slow melodic sounds and the feeling that nothing is real.  Dip just a toe into the waters of this album and you’ll see what we mean.

Setting the kooky stage is the album’s first single “I Was Fucked By A Cloud”.  Evoking remnants of The Pixies, this song would be easy to write off as a joke if it wasn’t so damn soothing. As such, you may find it on repeat over and over and over…

Flowing smoothly from one song to the next in waves and winds of dissonant sounds, it’s difficult to determine where one track ends and the next begins.  This is seen no better than on the transition to “20,000 Leagues Under the Sea” which starts as quietly as the previous track, moving slowly and pleasingly into echoey guitar riffs.

This isn’t an album that punches you in the face with walls of sound or straining vocals. It’s a seamless circuit of transient, haunting vocal choruses, beautifully monotone on a backdrop of simplistic instrumentals.  Have a listen and enjoy this enchantingly bizarre trip into the mind of this up and coming duo.

Gabrielle Mueller is a lover of all things music, writing and charcuterie boards. Gabrielle has a particular passion for music of the 1960s and the hippie movement in Toronto’s Yorkville district. Gabrielle runs her own music website, The Hippie Historian, where she reviews concerts, interviews musicians and writes about music history that spans the ages.
RELATED ARTICLES
album reviewsanmlplnetba da bing records
10