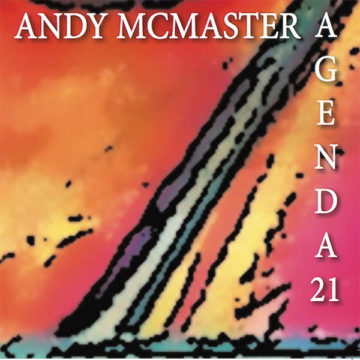 The Motors called it a day in 1980 with the fantastic, and damn near perfect album, Tenement Steps.  At this point, The Motors were really Andy McMaster and Nick Garvey, who had worked together since the days of Ducks Deluxe (1972 – 1975).  Garvey released a solo album almost immediately after leaving the band, McMaster seemed to retreat.  He did issue a single, “No Joy” in 1987, and worked with James Dewar in 1981, but otherwise he kept pretty quiet.

During the past few years, he would issue a song here and there, and such songs were welcomed by fans.  So it was rather shocking that on March 31, 2017, he issued an album, Agenda 21, with little or no fanfare, on his own Generally Speaking Records.  Some of the songs had been issued as singles prior to the release, but at the time there was no indication of an album.

The Motors were never ones to shy away from social or political lyrics (“Sensation” comes to mind), nor were they afraid of a good solid tune.  Here McMaster returns to familiar ground.  His voice may be a bit gruffer and the music is a bit sparser, but the nucleus of everything that made McMaster great is present and accounted for on this album.  There may be no “Airport”, but this album is full of great songs, and it is the type of album that you get more from with each listen.

Having said that, McMaster tackles subjects not often heard in rock records. “Fatima” is about forced marriage, “Black America” which serves as a tribute to Motown, is about corporate greed, and “Switzerland” is a song about assisted suicide. Finally, “Switzerland” is a song that is breathtakingly beautiful — “If you hear me crying out in the dead of night/Can you give me a helping hand? / For I cannot stand, this pain inside of me”.  This is a song that will certainly spur much conversation.

Musically, McMaster goes back to his guitar roots, and abandons the keyboards that The Motors embraced near the end of their run.   His playing has gotten sharper over the years.

The shame here is that one gets the feeling that we have missed out of on lot of great music in the 37 years since the last Motors album.  McMaster has a great deal to say and he says it beautifully.  I actually had given up on hearing an album by him or Garvey, and was content listening to the amazing Motors albums.  But here we are in 2017 and McMaster is back.  I sincerely hope this is a sign of more to come and perhaps a tour.  Andy McMaster has a great deal of talent, can write a terrific lyric, sings with emotion and can play.

Agenda 21 is an album of its time, and is a bold statement from an elder “New Wave” spokesman.  Welcome back Andy, and let’s not wait another 37 years for the next one.

Born and raised in Whitby, Aaron discovered music through his love of The Beatles. This led to a career in radio, writing for various publications, and ultimately a radio show about The Beatles (Beatles Universe), which ran for over four years. When not immersed in music, Aaron enjoys spending time with the loves of his life -- his wife Andrea, and daughters Emily and Linda (all of whom have an intense love of music too).
RELATED ARTICLES
album reviewsandy mcmasterswitzerland
9.0